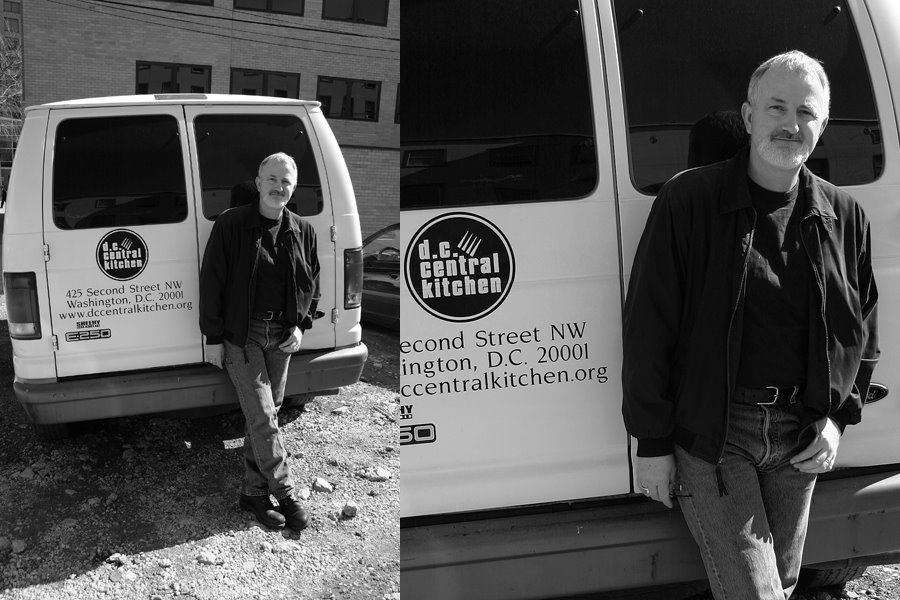 Make a business out of other people’s waste

Robert Egger is founder and CEO of DC Central Kitchen. The Kitchen is located behind one of the largest homeless hostels in the United States, in a run-down neighbourhood of Washington DC. I couldn’t find the entrance and the streetscape around was desolate and threatening. The few pedestrians were black and evidently homeless. As a seven-months pregnant white women, riding a bike and carrying a large and expensive camera, I desperately wanted to look like I knew where I was going. So I headed straight into the main hostel entrance, where the security guard was on the telephone. As I waited for him to finish, I realised he was talking about a homicide that had just taken place on site. Whoever Robert Egger is, I could tell already that he wasn’t someone who liked to change the world from an ivory tower.

Armed with the guard’s directions, I eventually found the loading bay which serves as the entrance to DC Central Kitchen. It was crowded with small vans. One of the men unloading food into the vast store-rooms showed me to Robert’s tiny, windowless office in the centre of the bustling kitchen. DC Central Kitchen, which feeds the homeless using left-over food from local restaurants, was opened in 1989 and now feeds 4000 hungry homeless people a day. It has also given culinary training to 450 unemployed men and women since 1990, to help them back into work. Fresh Start Catering – run from the same location – employs the Kitchen’s trainees to cater for private clients around the city, and its profits are ploughed back into the Kitchen’s charitable activities.

It was immediately clear that Robert was nowhere near as intimidating as his environs. He is widely regarded as one of the most influential figures in the United States non-profit sector, and it was easy to see why: he came across as dynamic, enthusiastic, thoughtful and caring. Not to mention talkative. Like a ball at the top of a hill, I found I needed only to give him a nudge and he would run for a very long time.

So, as a former nightclub owner, what had made Robert turn his entrepreneurial flair to satisfying lines of hungry homeless people rather than queues of eager clubbers?

One night Robert went out with a friend feeding homeless people on the streets of DC. “Did not want to go. Got kind of cornered by people. You know. ‘Come on! You’ve got to go. It’ll be great.’ ‘Oh, I don’t know. OK, OK.’” Robert was shocked to discover that the organisation he was helping that evening was buying food, even though this was the mid-eighties, when extravagant receptions everywhere were leaving tonnes of left overs. He was also surprised to discover that nothing was being done to help these homeless long term. Robert reluctantly realised that he had the vision and the skills required to do a better job. “It was one of those moments where you get to a crossroads. In other words it was like: ‘If I don’t do it no-one will.’”

That evening made him look with new eyes at his community in DC, and he encourages others who want to make a difference to do the same: “There is not a business person in the world, nor a general that would go into a new business or a battle without a sense of ‘What’s my budget? What is my inventory? What do I have to work with?’ Start adding it up. Look again! Stretch! Think!” Robert could see – where others could not – how to pull together the resources he needed. “America throws away 25% of what it produces every day. Most people see that as trash, we see it as gasoline for this engine. Most people looked at the people standing in line to get food and thought ‘Woah! There but for the grace of God go I’ and we’re like ‘Those are workers’.” Always ready with a snappy sound bite, Robert sums up what’s necessary. “You got to get practical. Say what you’re going to do and do what you say. Nirvana was a great band but it’s a horrible mission statement.”

Drawing on his experience of promoting nightclubs, Robert cannily planned the Kitchen’s opening to coincide with the inauguration of George Bush senior, having persuaded the organisers of his first presidential party to donate the left over food. “I knew there was an urban myth about hotels not being able to donate food, and that was hard to dispel. What better way to shoot down that myth than to get the President of the United States to donate food from the inauguration?” Now the Kitchen has its homeless trainee chefs bake cakes for every presidential inauguration: “No media guy in the world can resist that,” he says with a smile.

Correctly suspecting that I may prefer not to sit still for too long in my heavily pregnant state, Robert offers to take me on a guided tour. The scene is typical of any large and busy catering operation: acres of stainless steel, chefs in whites and clouds of steam as ovens open and close and pans bubble. In between liberally showering his employees with praise – “amazing man”, he says of colleague showing the ropes to a bunch of student volunteers – he tells me how he went one better with George Bush senior’s successor in the White House, by actually persuading Bill Clinton to come to the Kitchen and volunteer.

The volunteers, he explains, are an essential part of the grand plan. “We do not need a single volunteer to get our job done but every year we bring in seven to eight thousand and that is how we fight hunger.” Why? Robert hopes that volunteering will help remove prejudices as it did with some doctors who volunteered alongside a homeless man called Joseph. “Joseph looked at them and I think he saw all the things he could never be, and it reinforced this notion of, ‘Who the fuck do you think you are? You fucked up everything in your life, you’re just going to fuck up this.’ And in the doctors’ eyes here was this homeless guy with a knife. And so each side had these stereotypes that were affecting their ability to take the next step. But I came back fifteen minutes later and the big neat was that Joseph knew something they didn’t know. He knew how to julienne and cut a carrot. They didn’t. And when he realised ‘I know something they don’t know’ and vice versa, the walls came down, and that was one of those eureka moments at the kitchen. We call it the ‘calculated epiphany’.”

“My hope,” he continues, “is that these volunteers leave saying, ‘Oh my goodness, why don’t we do that? I didn’t think that was possible’”. Of bringing in President Clinton, he says: “I wanted people to wake up in Des Moines, Iowa saying ‘Hey, honey come and look at this. I didn’t know homeless people could do that.’ I don’t want people to watch and say, ‘Wow the Kitchen’s great. I’ll write them a cheque.’ That would be great if they did, but that’s not the point. It’s more important to liberate them from their old stereotypical mind frames.” Robert hopes that their work will keep sparking people into “calculated epiphanies” and bring them on-side. “I don’t want to tell people what to think. If I go out and say ‘you should la la bla bla’ they won’t hear me.” That’s why, when Fresh Start caters for an event, Robert insists that the organisers don’t mention to the guests that the food is made by formerly homeless people until after they’ve enjoyed it.

Robert’s calculated pursuit of epiphanies has paid spectacular dividends: there are now Campus Kitchens run out of dozens of universities around the United States, and a sister project called Community Kitchens in Schools. Back in Robert’s tiny office, I try to find out what drives the person responsible for these far-reaching achievements. He is charmingly self deprecating, insisting “I’m not smart. I barely graduated from high school. And I’ve always had good management here because I don’t run all this myself – I mean, I can do it, but I’m just not good at the day-to-day stuff. My attention span’s not that long. I’m not disciplined that way.”

When I point out that he nevertheless has an obvious knack for business and ask why he didn’t simply stay in the nightclub trade and make himself richer, it’s clear that he finds this as interesting a question as I do. “Over the years I’ve plumbed my soul on numerous occasions. You know, it’s not like I have some deep love for my fellow man, that I want to help the poor.” Music has had its influence on the way he views the world, judging by how often he reaches for quotes from his favourite bands – notably John Lennon’s acerbic view of mass culture in Working Class Hero: “Keep you doped with religion and sex and TV / And you think you’re so clever and classless and free”. And although the catholic nuns who schooled him probably weren’t intending to produce a nightclub-owning Lennon devotee, they too had a deep impact on his psyche. “It’s probably a merger of that kind of weird, missionary, ‘save-pagan-babies’ ethos of catholic school,” he concludes, “with punk music and just rock and roll in general.”

If he’s not so sure about his motivations, one thing that Robert is sure about is how you work with the grain of today’s world to make it a better place. “The power of the last century was all built around people saying ‘don’t buy that’. I’m more interested in saying ‘no, buy that’. That’s the power of this century. How do you open the masses’ eyes today? Not with anger and boycott. No, ‘be happy and buy!’ That’s how you change the world. What we need is a capitalist Ghandi. Someone who will raise the bar.”

Although he’d be far too modest to apply that description to himself, Robert has already proved he has the capitalist part of the equation sorted. And a few months after I met him, Robert was in the newspapers for going on hunger strike to shame the DC government into stumping up for some of the meals his Kitchen delivers to their shelters. Ghandi would have approved.