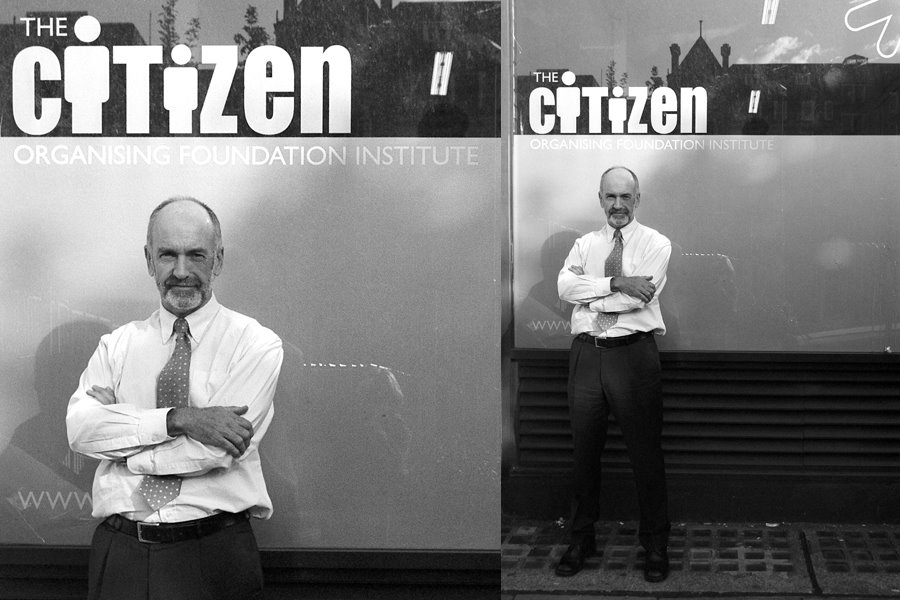 Organise people around their broad self interest

“Go on Father, you’re here to bring about the Kingdom of Heaven, so how’s it going?”. This is the kind of cheerfully awkward direct question that Neil Jameson tells me he likes to put to parish priests around London. He admits, “It’s a bit embarrassing and often we’re thrown out before we get to the cup of tea”. But when he finds priests who are willing to step back and grapple with the question of what influence they’re really having in their communities, they usually end up signing up for Neil’s Citizen Organising Foundation (COF). The COF brings together faith congregations, trade unions, student groups and schools to find issues of common interest and act on them.

I’m thankful that I’m being made a cup of tea before I’ve had a chance to ask any awkward questions. Neil jumped up to greet me and offered me a drink as soon as I arrived at the COF’s smart new offices in Whitechapel – so smart, I was surprised to be met at the door by the boss himself. But then I can imagine that Neil had lots of practice giving tea and biscuit hospitality in his former incarnation as a social worker. He still has the reassuringly unthreatening look of that profession, and after we have installed ourselves in a small meeting room, I ask him why he originally chose that path.

“I trained as a social worker because I used to think that that individual way of helping people would be good for me and good for them. Very quickly I discovered it was quite good for me because it paid my salary but it didn’t really do any good for them. At the worst, people’s problems were actually created by the professionals who try to help them.” Neil started to look deeper. “I got very interested in issues like poor housing, the lack of play space and why certain families always came up as being problems. I got to know the families as friends really, and realised that they wouldn’t have any problems at all if they had a bit more power and certainly a bit more income.”

Social work, he realised, was never going to tackle the root of the problems of the poor: “Throughout history, the only time people with low income and now moderate income got anywhere is when they organised around their broad self-interest.” But in the mid-eighties many such people were drifting away from the very institutions which could have given them a voice. “People were just withdrawing from politics, not voting, leaving the church, and trade unions were collapsing.” Neil became convinced that he had to get into the profession of organising. “By the time I got to forty, I was trying to find a job that would pay the mortgage and would keep my kids happy, and also tackle the two evils of power and poverty in a big way.”

In 1996, Neil brought to life the Citizens Organising Foundation, initially called the East London Communities Organisation. “We teach the ancient Greek approach to politics. If you organise and you’ve got a fair number of people and you’ve got a good argument and you’re democratic and you’re non-violent, then you can get things done. If you don’t organise, you sit and watch things on television, the world begins to fall apart, and the other lot win. Corporations organise, the business community organises, even criminals organise, but most community people don’t organise because they think that not having to negotiate with others makes them free. In fact it makes them weak.”

COF now has chapters in South London, West London and Birmingham as well as the original grouping in East London, which is made up of 35 institutions, through which about 60,000 people are represented. Delegations from each group meet monthly to work on campaigns. As I saw en route to Neil’s office, Whitechapel has a vibrant street scene with an amazing mix of race, age and social class, and the borough of Tower Hamlets is one of the most diverse in the UK. If it’s possible to achieve successful cross-community dialogue here, you would think, it should be possible anywhere.

“We try to get the folk who are in Pentecostal churches to see that it is in their interest to work with the folk in the Catholic church. And to see that it’s in their interest to work with the union branch around the corner. And, even more exciting, with the mosque around the next corner.” If they’re willing to get past the cup-of-tea stage, “People discover how magnificent it is to be in solidarity with others that hitherto they thought were weird, eccentric, off another planet, and you wouldn’t go into their building if somebody paid you. And then you discover they’re worried about their children like you are, they’re mugged by the same muggers and litter is the same problem for them as everyone else.”

Don’t the meetings degenerate into arguments over politics or which religion’s version of the Kingdom of Heaven they should be trying to create? Neil’s ensures they don’t by finding causes they can all rally around: “Once you get them in a room, you don’t talk about the ideology, you don’t talk Labour or Tory. You talk about: Who can help us? Who’s an ally? Where are we going to get the money from? What power have we got? What power have they got? And let’s just do it.” Neil has got the East London Mosque, several Unison branches, Stepney Green School and the Buddhist community in Bethnal Green successfully working together on campaigns including Whitechapel Watch, which aims to clean the streets of litter and drug dealers, and The Living Wage Campaign, which tries to get large companies to pay people a realistic living wage (at the time of our conversation, about £7.20 an hour in London), rather than the legal minimum wage (£5.35).

The Living Wage Campaign has already changed the payscale in four East London hospitals, and shamed numerous big banks in Canary Wharf and the City into paying their cleaners more, too. COF’s latest campaign is “Strangers to Citizens”, which is calling for a pathway to citizenship for hundreds of thousands of undocumented immigrants. Many of these individuals, ignored by the state, look to their religious communities for solace and support. The leader of the Catholic Church in England and Wales, Cardinal Cormac Murphy-O’Connor, and the Anglican Bishop of Chelmsford are some of the most prominent supporters of the Strangers to Citizens Campaign.

Neil is passionate about the need for diverse groups to negotiate with others in order to get things done. It’s hard not to be impressed by someone who isn’t seeking to bypass ageing institutions which are losing strength and membership, but to revitalise them. “We think these kind of institutions are primary building blocks of civil society. They’re the next level after family where people learn how to relate to each other. They go to a working mans club or they go to the women’s institute or they go to the unions, or the Methodist Church, and they have to “do” meetings, and they have to learn how to put up with Mrs So-and-So who goes off at a tangent every time. And that’s how you learn about democracy.”

Despite Neil’s best efforts, the decline of some churches and unions seems irreversible. But the kind of engaged citizens trained in leadership skills by the COF are perfectly placed to nurture new forms of grassroots community groups to step into the organisational breach. As Neil says, “there’s no end of campaigns we could do. It’s a great profession to come into.”