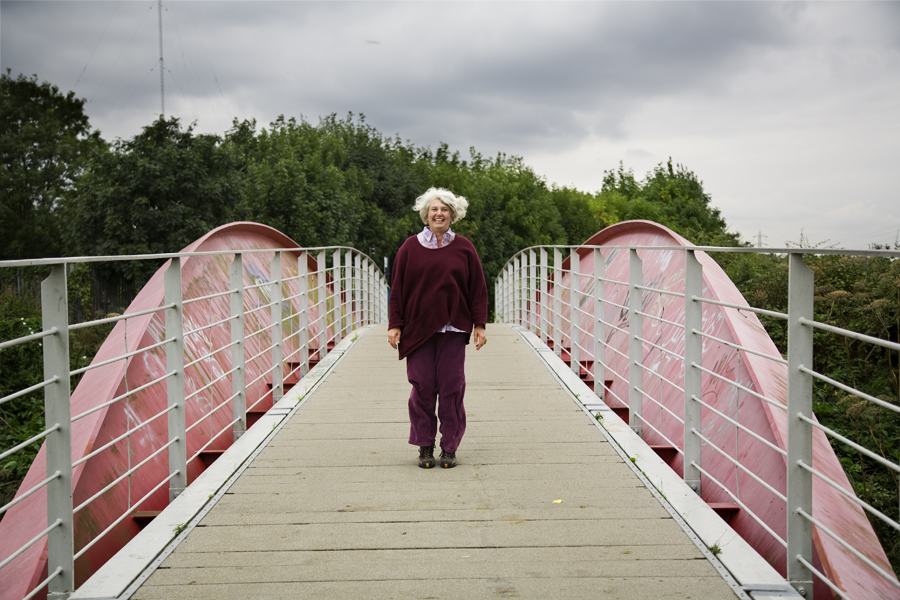 Elke Heckel works unpredictable hours, often late into the night.  Her job is messy and her actions can be a matter of life and death, but she probably has one of the most rewarding jobs in the world.  Elke is an independent midwife and she delivers about 20 babies a year, mainly in people’s homes.  She is part of a team of four midwives called the London Birth Practice who operate all over London.

Here I must declare an interest.  Elke delivered my second daughter in our living room in Hackney.  She was an amazingly calm and competent presence who enabled me to have an incredibly relaxed and smooth birth experience.  I would highly recommend it to anyone who is expecting a baby.  There is a snag.  The price tag of having a midwife who you know and trust deliver your baby, along with the several months of prenatal and postnatal care is £4000.  But I strongly believe that Elke’s work has wider implications for childbirth in Britain and so does she.

Elke and I met for a walk on the Middlesex Filter Beds, one of her favourite places to take in the surprising amount of nature that Hackney has to offer.  Our meeting looked like it might be prevented by a mother who was having intermittent contractions.  “I don’t think anything will happen until this evening” Elke informed me confidently.  Elke must get used to having her life interrupted like this.

Once a woman chooses an independent midwife like Elke, she will receive regular visits in her own home up until the birth. Most choose to have their babies at home, but where a hospital birth becomes necessary, Elke will also attend the birth there. The midwives visit the mother and new baby for at least a month after the birth.

“I feel like we [the London Birth Practice] have got the care that we give to women as near to perfect as possible.  The way we work with women, our relationships with them, how much we work and our relationships with each other is pretty much perfect now.  That has come not through reading books, but through experience” Elke tells me as we stride out into the open of Hackney Marshes.

I wonder if this perfect service isn’t all very well for those who can afford it, but what about everyone else?  Elke agrees NHS maternity services need to improve dramatically and she spends a lot of time campaigning to make this happen.  “If women don’t know what is possible, how can they ask for it?” she says.

As a student midwife and then for 2 years in the NHS after she’d qualified, Elke became very disillusioned by the practices she saw. “When you’re a student it’s like you’re invisible, so you really get to see what’s going on”.  Elke realised that lack of continuity of care meant that women were usually meeting their midwife for the first time in labour and would most likely never see her again.  The lack of a trusting relationship between women and midwives at this critical time is probably one reason why medical interventions in childbirth and caesarean rates are soaring. Women often feel totally powerless at the time when they could feel more empowered and proud than ever before.

This situation is far from satisfying for the midwife too.  That’s why Elke took the decision to go independent.  “I don’t want to provide a poor service.  If I could do it for less I would, but I can’t.” she explains.  The success of her work hasn’t gone unnoticed at the local NHS Primary Care Trust in Hackney.  Recently, they asked her to come and participate in a panel discussion for the hospital midwives, after they watched a film which highlights the work of independent midwives and home births in the US.  Elke was there to share her experience and to help improve wider practice in the NHS.

This may become even more important if a proposed change in legislation goes through in 2010.  The government want to make it illegal for a woman to choose to give birth with an uninsured independent midwife.  Such insurance is currently unavailable in this country.  Elke would have to either give up being a midwife, to rejoin the NHS or face legal action.  It’s a tough decision.  The primary care trust have shown some interest in contracting the independent midwives in, but that would likely remove much of the autonomy which makes the London Birth Practice what it is.

Elke and her colleagues have been campaigning hard to prevent this change which will remove her model of maternity care from existence and thus limit women’s choices further.  “In the end the demand for change has to come from women themselves, not from the independent midwives.  People just think it’s about us trying to drum up business.  Which it’s not.”  Elke concludes as we return to our walk’s beginning.

This sets me thinking and I decide to use an exhibition I’m planning, of photographs of women before and after they have their first child, as an opportunity to raise awareness about these issues even further.  I feel that as a society we are underestimating the real impact to women of having power removed from them while giving birth.  Elke has definitely inspired me to do something about it.

For more information about the campaign to save independent midwifery go to www.saveindependentmidwifery.org