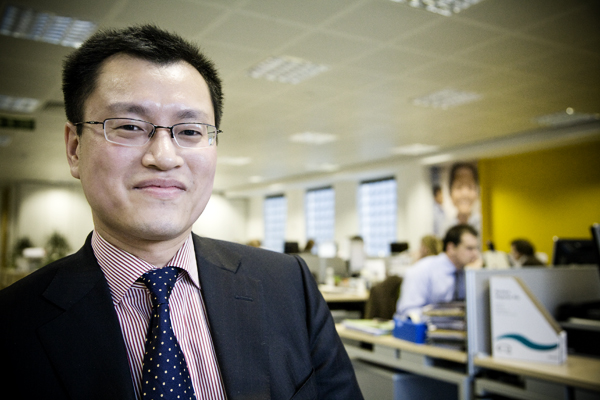 I like a man who can explain complex financial transactions using a sandwich.  That’s how Paul Cheng illustrated why we need to fund charities differently.  “If you buy a sandwich from M & S you only really care about the quality of that sandwich, but if you buy shares in M & S, then you care about the company as a whole.”  According to Paul, most grant-makers want to buy the equivalent of sandwiches from charities: they are only willing to pay for their products and services rather than making a longer-term investment.  He is working to encourage charitable donors to change the way they use their money.

Paul Cheng is an investment manager at Venturesome, one of the UK’s first private social investment funds.  I met him in the City of London, in offices smart enough to house any investment bank.  Paul was very open and articulate about Venturesome’s aims.  They are trying to create a social investment market in the UK.  They want charities, NGOs and social enterprises to be able to access a range of financial instruments similar to those available to businesses and individuals.   Paul explains: “If you’re a company you can raise money in many ways: you can issue shares, you can raise debt, you have lots of choices.  If you’re an individual you have lots of choices too: credit card, mortgage, bank loans.  If you’re a charity, it’s all grants or donations.  It’s difficult to raise debt or take out a loan.”

Paul tells me that this is the reason why in the UK, even though we have 190,000 registered charities, 90% of the income to the sector is with the biggest ten.  Without access to a variety of sources of funding it is very difficult for charities to grow.  “Some of the most intractable problems of society are left to the charity sector.  And yet, if we funded our companies in the way we fund our charities we wouldn’t have an economy. Essentially we view charities as beggars at the gate.”   The problem is compounded by the fact that many funding bodies only pay out grants in arrears.  Charities have to do the work before they get their money and they are faced with immediate cash flow problems.  The “sandwich” problem is another factor because without long-term investment it’s difficult for small charities to turn into new Oxfams or Save the Childrens.

Venturesome was set up seven years ago to try and address some of these issues.  It uses private money from foundations and high net worth individuals to try and expand the social investment market in the UK.   One major challenge for Paul and his colleagues is to educate people who work for charities and also mainstream bankers.  People running small charities are often very passionate about their cause, but may be lacking the financial skills required to be successful.  The major banks are cautious about lending to charities even though Venturesome has found that they only have a 5% default rate.  A bank might expect a 12% to 15% default rate with small to medium sized businesses.

As an investment manager Paul is involved in “everything from sourcing deals, doing due diligence on deals, structuring deals, giving out financial advice and working at the policy level with government.”  He tells me, “I talk to government and explain these are the needs of the market based on what we’ve done.  I think you can only work at the policy level if you’ve got your hands dirty doing the deals but if you just do the deals and not the policy, it’s a shame because you have so much knowledge.”

Paul definitely has a lot of knowledge.  He was formerly a lawyer in an international law firm, but found himself itching to find a job which had the intellectual rigour of law while also satisfying his desire to make a difference.  He had seen a lot of people in the City of London who said they would make their money first and then do good later, who got stuck in jobs that they hated.  So, Paul decided to do an MBA in Chicago and became fascinated in the blurring between business and charity.  He explains: “Imagine a spectrum, for profit on one end, charity on the other.  The profitable end wants 10% return, a philanthropist at the other end is happy with -100% return.  There is a whole spectrum in between where we can experiment with financial instruments and get some of the money back while also getting a social benefit.”  Developing these new financial instruments at Venturesome, in partnership with charities seems to have provided Paul with the intellectual challenge he was looking for.

However, convincing charitable donors to use their money in different ways has not been easy.  Paul has found a psychological barrier: although people don’t mind giving money away, they don’t like the idea that they get a portion back. “They start to worry about why they’re losing money.  They don’t want to be there.  It’s completely inconsistent.  It’s a quirk of financial history that we think in this way.  It’s a real challenge”

Paul and his colleagues hope that one day there will be many organisations like Venturesome. “We’d love it if people would fight over different types of deal or co-invest.”  For now, 90% of the money in social investment comes from the government.  Venturesome would like to see that balance shift so that there are many more privately run social investment funds and presumably, many more investment managers like Paul.