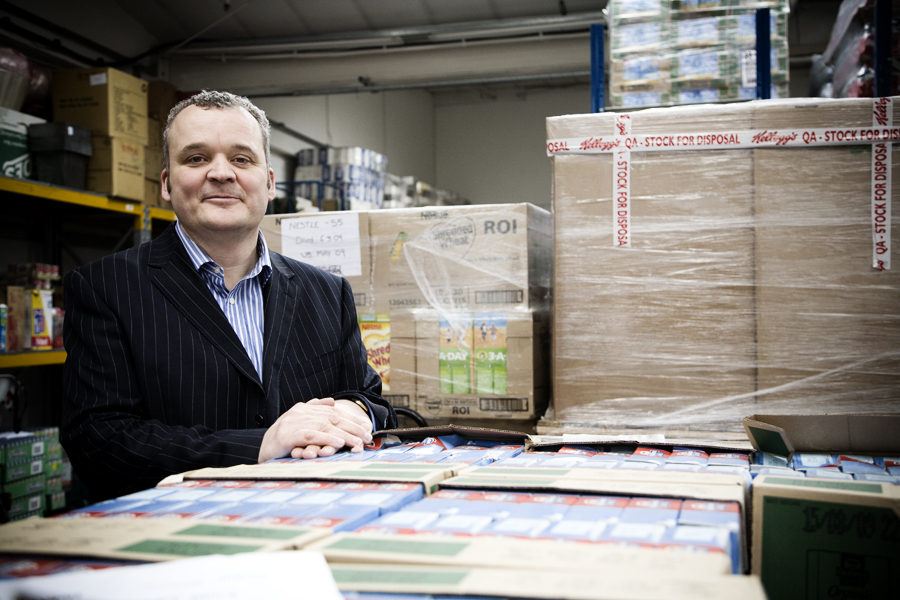 Every year, UK supermarkets throw out at least 100,000 tonnes of food which is still safe to eat.  It’s a shocking figure when considered against a backdrop of global poverty and environmental degradation.  Tony Lowe is the chief executive of FareShare, an organisation which aims to be part of the solution to this profligacy.

FareShare takes waste food from manufacturers and retailers, that is still within its sell by date, and feeds 26,000 people daily.  It keeps to the same hygiene standards of any mainstream distributor and ensures that the food remains appropriately frozen, chilled or at ambient temperature.  FareShare then redistributes the produce to organisations who look after people with no or low income: Homeless hostels, substance misuse projects, breakfast clubs for children, centres for refugees or the elderly.  Eager not to create dependence on free food, FareShare’s wares are only available to people who are willing to accept other services to help them out of the poverty trap.

Tony greeted me in his tiny windowless office in the middle of FareShare’s Bermondsey warehouse.  It reminded me of another windowless office which I visited five years ago to talk to Robert Egger, a man who has also made a business out of waste food.  In his pinstriped suit, Tony has the look of a corporate manager and I get the feeling the image is intentional. “People expect a charity to be rubbish, but we have very strong processes and systems to ensure that all the food is safe.  Showing that this thing is viable and doable has been tough, but now we have an industrial operation and we don’t have to prove ourselves every day,” he explained.  You can tell that Tony has to spend a lot of his day talking. When he’s not trying to generate the 3 million pounds of capital they need to reach their target of feeding 100,000 people a day, he is working with all the majors in the food manufacturing and retail industry.  They take food and drink from Coca Cola, Nestle and Pepsico along with many other manufacturers and big supermarket chains.  These companies can and do send people to check on FareShare’s warehouses at any time.

Tony had the perfect background to take FareShare from a project within its “parent” charity Crisis in 2003 to become an independent enterprise.  He had experience both in retailing and the not-for-profit sector.  He has worked for Marks and Spencers and Alliance Unichem as well as Oxfam’s trading arm.  He also ran his own business for a year but found “the stress of working for myself was too much.”  Having sold that business he went to work for Waitrose again as a department manager.  “After a year, I had already decided that I no longer wanted to be in the mainstream retail sector.  I was delighted when an agency contacted me and said they were trying to find a director for FareShare. The job was made for me!”

FareShare are trying to make their operation into a profitable business by charging the industry for taking their food away.  “They would have to pay to dispose of the food anyway.  At the moment 20 companies pay us and it gives us 7% of our income.  In the future we hope that it will give us half,”  Tony explained.  The problem with payment is the complexity of who is responsible for the waste food but FareShare are determined to overcome these barriers.  For the first time government is also considering funding part of FareShare’s operations.  It’s a big step forward for Tony and his team.

FareShare has grown enormously under Tony’s watch.  “We started with 6 staff and a turn over of £300,000.  Now we have 17 staff and a turn over of £1.6 million.  We have 13 depots and 300 people volunteer for us every day.”  Volunteering is an important part of the business model.  The vast majority of volunteers start out as members of the “client group” who receive food.  FareShare offers them work experience and certificated education that will help them get back to work.

Sadly, at a time when the organisations FareShare works with need food more than ever, the economic downturn is making fund raising increasingly difficult.  “Individual giving is dropping off, corporates have less money to give, trusts and foundations have lost so many of their assets that they are also losing their giving power.”  But Tony remains determined: “We’re a bit disappointed that we can’t grow faster this year.  Everything is already done on a shoestring.  But I’m bloody minded and I will make it happen.  What drives me is that I know the difference that it makes.  I’ve seen what good the food does.”

FareShare seems like such a brilliant way to reduce some of our society’s terrible waste, while giving decent food to people who need it. I really hope that it remains a funding priority and FareShare will achieve its three year ambition to open 17 more depots across the country.  In the meantime Tony urges us to “Ask questions of organisations that your involved with. Ask what’s happening to waste food and if there’s fit for purpose food going to waste, go and ask the person in charge what they’re doing about it!”