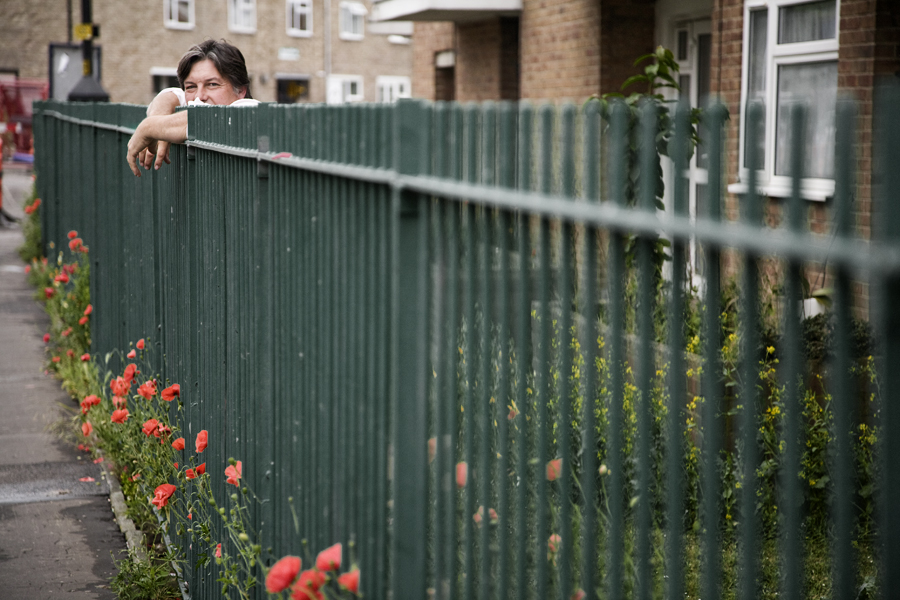 Make the most of urban green spaces

Thanks to John Little and the Grass Roof Company, the Clapton Park Housing Estate in East London, looks like no other. The borders are filled with wild flowers, red poppies drape onto the pavement and residents grow vegetables in former rose beds. Rather than rows of unchanging shrubs and acres of fenced, mowed grass, John has created gardens which encourage the wellbeing of residents and enable those who want to grow things, to do so. John tells me, many of the wildflowers are grown from seed: “We seed the whole estate for 250 quid”. The resulting plants need far less watering and have lowered the need for herbicides. It’s hard to understand why this isn’t happening on every estate in the country.

I met John in Venetia’s Coffee Shop, which is just up the road from Clapton Park. John explains how he has always appreciated plants: “When I was a teenager in Essex, I was very interested in wild plants. Which was a bit bizarre. Not many kids were into that. I loved planting in my grandfather’s garden and I did voluntary work with the Wildlife Trust.” However, for the first 20 years of his career John worked in the family shoe business. It was only when his father decided to retire, in 1998, that John thought he would also pursue another path: “I thought I’d have a go at gardening: Turfing and whatnot.”

John, and his brother Robert, started the Grass Roof company which concentrated on designing and building garden projects. As the name implies, one of their specialities is installing roofs that are covered in vegetation. John explains some of the many benefits: “Green roofs keep buildings cool in summer, they reduce the urban heat island affect and they encourage sustainable drainage, because they hold onto sixty percent of the rain that falls onto them.”

During the first couple of years of operating in Essex, John enjoyed experimenting with different habitats and materials. They worked for some schools and found them very open to using wild plants and even, after some pursuasion, green roofs. The next big thing was when the Clapton Park Estate asked if the Grass Roof Company would do some work for them: “We dug up a load of concrete either side of the road, put in some beds and some art works. Just to make it look different from a council estate. We experimented with using different planting – not shrubs that have no seasonality.”

The residents liked the way that they worked and when the contract came up for the estate maintenance, they asked John and his brother to tender: “I just thought, there’s no reason why we can’t view maintenance like the other things we do. I said ‘We want to put wild flowers in and make some room for food’. They gave us the benefit of the doubt even though we’d never done anything like that before.”

Not everyone was immediately convinced by the more “organic” looking estate: “The first year we had to put signs up. It just looked like we’d left the weeds to grow everywhere.” John also had to win the contract for herbicide control on the estate to prevent their flowers being sprayed with weed killer. He says he still struggles sometimes to convince the contract manager about what they are doing: “Our guys know what a poppy looks like and so they don’t spray the plants that look interesting. It does sometimes look like we ain’t done bugger all, but when there are poppies coming up through the cracks, it gives a really nice feel to the place.”

Some residents were particularly enthusiastic about the opportunity to grow food. Like Zanep, a female resident who used to spend all her time indoors. There were already allotments on the estate but the waiting list is about five years long: “We saw pieces of land with fences around them that no-one goes in to. So, we’ve been nicking pieces of suitable ground and giving them to people to make food. It just made sense really.” Now Zanep has a nice big plot where she grows food and she even bakes bread outside for her friends. “It’s concrete stories like that which really make you feel like you’re making a difference. That’s the kind of thing I like to hang on to.”

In 2007 John and his brother won a silver gilt at the Chelsea Flower Show with a Clapton Park Estate garden. They took some of the residents to this quintessentially English event. “They enjoyed that because people were interested in where they lived. It’s an incredibly white middle class event and our people were the only black people in the show.”

John wishes that other councils would copy some of the ideas from the Clapton Park Estate. “What’s tricky is organising things so that it’s easy for a big team to do. To roll it out we’d need some kind of formula that works, but you need to be flexible. They’re flowers at the end of the day. Sometimes the seeds grow, sometimes they don’t. Because most of the contracts are council run, they’re not so inclined to experiment.” Turning over land to allotments seems to be an easier model for other estates to follow: “There are often spaces that have been mowed for years, with a fence around them, that no-one has ever stood on. If councils realised they could be maintained more cheaply by turning them over to food growing, then they might be interested. If you add up the green space on social housing there’s a massive amount that could be used better.”

It’s hard to see the downside of what John is doing: Helping some of the people who need it most to get back in touch with nature and the seasons. When I met him he was just back from telling his story at a conference in Glasgow: “I go to these conferences and it makes me wonder, why am I the only person who has managed to deliver this on a housing estate?” I leave John with the same view. Why is it so hard to make this happen? As John puts it “it’s so ridiculously simple, I can’t understand why it’s not mainstream.”