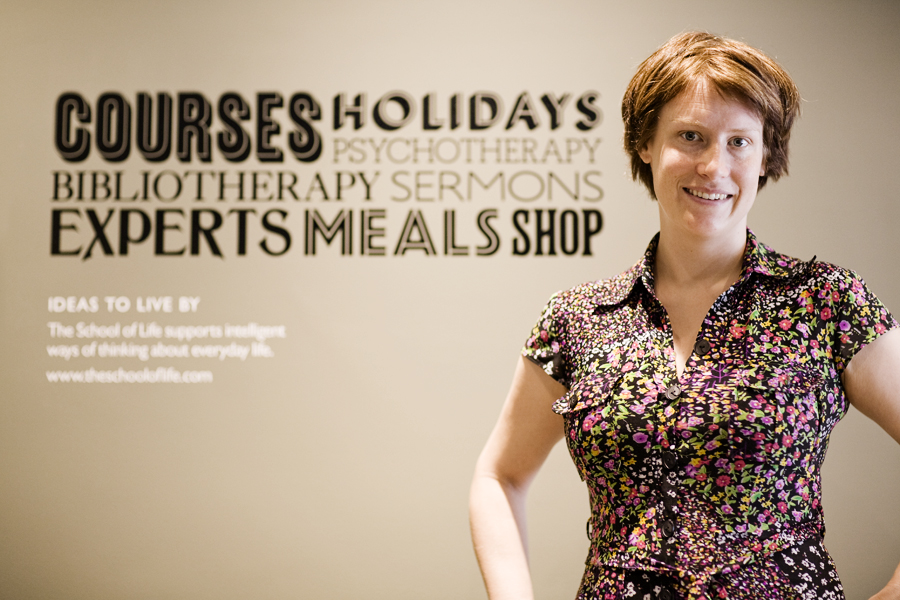 I met Sophie Howarth last summer, so this blog post would not win an award for being up-to-the minute! Last year’s How to Make a Difference films have led to a bit of a posting backlog. Over the next few weeks, I’m going to be writing about three great interviews I did over the summer. Then I’m going to embark on a season of Climate Change related How to Make a Difference profiles which, I hope, will inspire lots of you to do your bit towards that very pressing agenda.

Now back to Sophie, who is the founder of the School of Life; A social enterprise which, in her words, aims to “take a self-help approach to the history of ideas and make them more relevant, alive and a lot more fun.” In practise, this means that she and her small team of colleagues run adult education courses from their funky looking shop in Bloomsbury. Courses with titles like “how to be a good friend”, “how to make love last” and “how to be alone” aim to explore a wide-range of literature and thought in a way that attracts the modern consumer.

The price tag is £30 for an evening discussion or £125 for more extensive weekend courses. Sophie says: “People are used to education being free, or very cheap, and we’re putting it out at cost price. So there’s the idea that we’re very expensive and only cater to a certain section of the population. Actually, our competitors are all government funded or heavily subsidised.” Sophie is adamant that she does not want to go down that path, with its endless form-filling and potential compromise of ideals. “It would be lovely to offer the courses much cheaper, but it’s quite a good test of whether people have got something out of it, if they are prepared to return as paying customers. It makes you more genuinely accountable.”

Sophie had been mulling over the idea of spicing up the world of adult education when she had “a stroke of luck”. A friend of hers suggested she pitched her idea to a group of funders who were looking for a culture project to invest in. She convinced them that the School of Life was a good place to put their money and quit her job at an East London arts centre in Summer 2007. For a year, Sophie was paid to develop the idea at home while pursuing an exhaustive search for suitable premises. After realising that she could get a lot more for her money if they located themselves in a shop, they chose their current premises on Marchmont Street. The ground floor is an appealing, if sparsely stocked, bookshop and downstairs, their seminar room is beautifully decorated with the illustrations of Charlotte Mann. Sophie muses that “it’s difficult to remember which came first, the idea of approaching education like retail, or finding ourselves in a shop”. Whichever way around things happened, the recipe has been one of success. The School of Life has attracted lots of media attention and has developed a powerful brand. When I met Sophie they were not in the black financially yet, but had plans to sell bespoke courses to blue chip companies as one way of getting there.

“The ideas we don’t have to pay for, so that’s an asset to our business plan!” Sophie laughs. The big challenge has been finding teachers who can deliver the material in a way that meets Sophie’s demanding requirements. “We want to be really quirky and humble but we want to deliver something completely extraordinary, that is intellectually up there with the best universities, that is up there with the most extraordinary personal development or drama experience you might have.” This has taken a lot of coaching and preparation on behalf of the School of Life team: “The amount of effort that we put into everything makes it utterly illogical.” But once the teachers are on board, Sophie says they are “very wedded to us”. Another asset to her business, I’m sure.

Sophie enjoys helping her contemporaries work out what to do with their lives: “Our audience is mainly our own age. They are thinking how can I make the most out of life? We’re here to say, ‘take the opportunity to come and work out your own thoughts. Even if you feel like you’re 45 and should have sorted them out by now.’”

What about the future? Sophie would like to see the School of Life replicated on high streets around the country. “We want to be like the Boots for ideas.” I suspect they could be a much cooler chain-store than that. Right now, I think Sophie is on maternity leave and so probably has other priorities, but watch this space for more engaging evening classes coming your way.