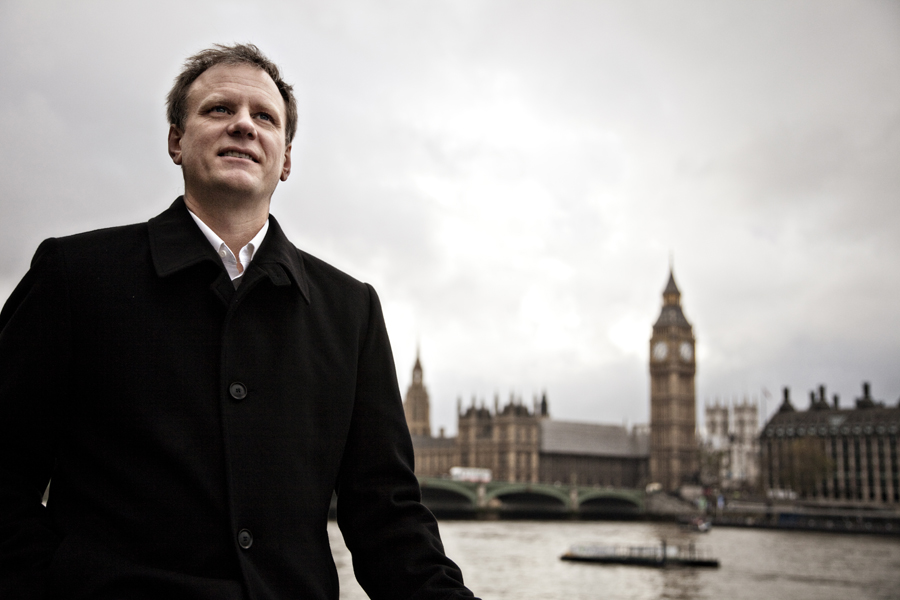 Creative disruption is Reed Paget’s aim. He believes that by setting up very environmentally conscious businesses, and proving that they can succeed in the market place, he can influence the behaviour of business as a whole.

His first attempt has been to transform the bottled water industry with the brand Belu. 8 years ago, Belu was just an idea for the documentary film maker Reed, who had come to the UK from the US to run an on-line news channel. The dot-com bubble burst and the channel lost its funding. Reed, who had always been passionate about the environment, decided that ten years in the media was enough for him and it was time to do something more practical. “I thought instead of talking about the problems of the world, why not get involved in business? I saw business as the main culprit and thought maybe I could do more there.”

Reed chose the bottled water industry, in spite of its overall reputation of being unsustainable, because “in a world where many countries don’t have good water, or people don’t trust the water they’re being given, people will continue to consume bottled water.”

Belu distinguishes itself from other bottled water companies in several ways. They are always striving for environmental best practice and low carbon emissions. They are also a not-for-profit organisation which donates any surpluses to clean water projects.

I met Reed on the South Bank of the River Thames, near to one of Belu’s most recent philanthropic projects. They have funded a Passive Debris Collector to sift some of the tons of rubbish that get thrown in the Thames every day. The ability to fund such projects has been “The biggest success and the biggest mistake of Belu”, Reed told me. “It was the best decision because it told our customers that we were in this together, and trying to do something good. The downside is that it has been almost impossible to raise growth capital.” Investors don’t want to risk their capital unless they can see a potentially, significant upside if things go well. This has meant that Reed has only ever been able to get access to small loans. “During 6 years of trading, we have done 35 rounds of funding from 14 different funders. Had I made Belu a for-profit, green business, I could have raised the money in 1 or 2 rounds.”

However, other aspects of Belu have worked very well. Initially, Reed scoured Google for green investors. Eventually, he came across Hal Taussig, an investor from the US, who had previously set up a green travel agency and was interested in the concept of Belu. Hal provided enough money for Reed to complete a product design which in turn enabled him to get a contract with the UK supermarket Waitrose to sell Belu Water. “We had never manufactured at that point. We didn’t even have the money to manufacture. We didn’t tell Waitrose that! But they liked the idea. Good for them!” Once Reed had one contract they were able to find other funders who would give them long-term loans to manufacture. “Then we started selling. First with a glass product line, then plastic, then we went carbon neutral. It was very hard though.”

I am so impressed that Reed was able to turn his hand so easily to starting a business. “Having worked in documentary film, I had to learn how to be entrepreneurial and to manage projects. But, I had no idea what a profit and loss statement was, or cash flow or the difference between branding and marketing. I didn’t own a single button-up shirt! What I realised is these things are learnable.”

Within weeks of starting Belu, Reed was talking to the Rocky Mountain Institute in the US about biopolymers: plastics made from an infinitely renewable resource, plants. After a three year research and development project, Belu introduced its first corn plastic bottles in 2006. It’s still early days with these, but according to Reed, if they become more widely adopted, their lifecycle is 50% less carbon intensive than traditional plastics. Neither does Belu use PVC liners in any of its caps. A common practice which apparently has uncertain health consequences for consumers. What carbon emissions they are unable to save through energy efficiency in production and distribution, Belu offsets. Belu is made in the UK, using UK raw materials (if available) and is not exported. I wonder how Belu can compete on price with all these extra costs. “Every company has a profit margin, but because we are a not-for-profit company we can take out of our profit the cost to be green. Nevertheless, we haven’t been the cheapest in the market.” Reed is convinced that scale will help with this.

Now Belu is growing fast: “We’re at 2.5 million pounds turnover. We’ve recapitalised. We’ve hired a new managing director who has more commercial experience.” But for Reed the aim is not just market dominance: “The goal is not Belu. Belu is a tool that achieves a bigger goal. We’ve planted a seed and now others are trying to copy us. It’s going to create a change even if I don’t ultimately own the company that sells the product.” When Belu started business, there was very little environmental awareness in the drinks sector. Now, most of Belu’s competitors are doing something and Reed believes that the existence of Belu has helped to push them that way much faster.

So what’s next? Reed has set up a new company called One Earth Innovation. This company will endeavour to spawn more start-ups like Belu, in different sectors. “We’ll find out how to create the greenest brand, then we’ll bring it to market. Either we’ll win the market, this time with capital, or we’ll force our competitors to be green by disrupting the market.” He wouldn’t give me any clues as to what those new companies will be, although toasters did come up in the conversation quite a lot… Reed says he has learnt the hard way that it’s best not to go public until you know the timescale you can deliver on. People have criticised him in the past when things have been harder than expected, and taken a long time. “When I started Belu I was very naïve. Hopefully, the next venture will be more successful, without as many mistakes.” I think the chances of that are looking good.