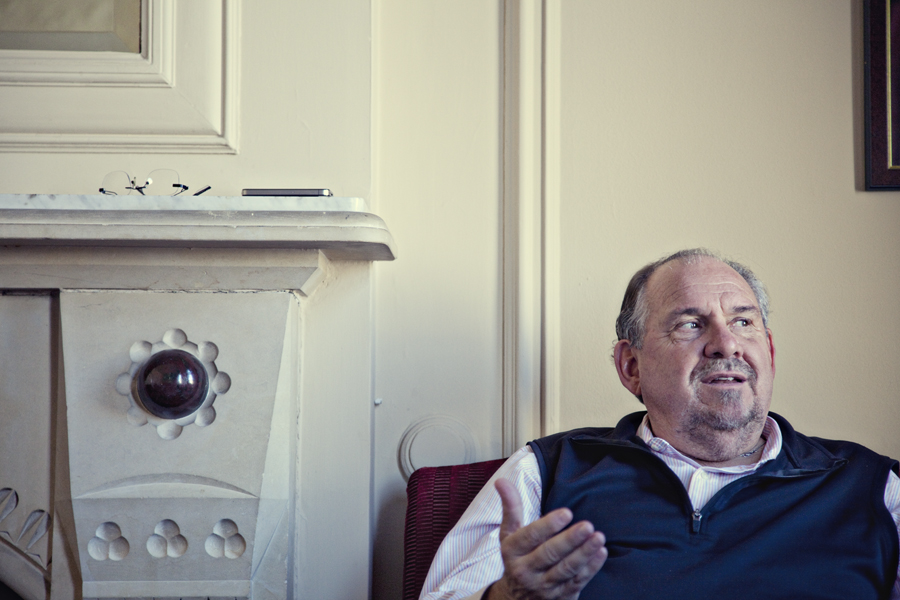 There’s a concept in psychology called “nominative determinism”. The idea is that men called “Dennis” are more likely to become dentists, or those with the surname “Lawman” are ever-so-slightly more likely to take up a career in policing or criminal justice. Well, I’m sitting in a fusty corner of a fusty hotel in Oxford, and I’m talking to Dr Brilliant.

If Larry Brilliant was a character in a book, nobody would believe in him. Trained as a doctor, he joined a group of protesting native Americans – “Indians of All Tribes” – on Alcatraz island, acting as midwife as a protestor gave birth to her child. His resulting fame turned into a role in a hippyish movie, Medicine Ball Nation, the movie role turned into enough cash for a cross-continental bus ride from San Francisco to India, the bus ride turned into a fundraising effort for a cyclone in East Pakistan, and so the epic continued. With his wife, he studied yoga in a Himalayan monastery – pretty much everyone did at the time, he deadpans – before, on the instructions of his guru, he joined the effort to eradicate smallpox in India and throughout the world. It was the first and, so far, the only time that a disease in humans has been completely wiped out.

That’s enough for one lifetime, but Brilliant and his wife also founded the Seva foundation, which has restored sight to over two million people. (It was kicked off with a donation of $5000 from a then-unknown Steve Jobs.) He co-founded The Well in the 1980s – the stone-age version of Facebook that pre-dated the world wide web itself – became a dot-com CEO, worked in a refugee camp in Sri Lanka after the 2004 Tsunami, won the “TED Prize”, was the first head of Google.org, Google’s philanthropic arm – not a happy experience, he admits – and now runs the Skoll Global Threats Fund. These days he is probably most famous for his efforts to nip modern-day pandemics in the bud. Who am I trying to kid? He’s most famous for being called Larry Brilliant, and on this particular afternoon he is on particularly charming form.

Officially I’m there to interview Dr Brilliant for a column for the Financial Times about the economics of pandemics. But I can’t help but hijack my own interview for ten minutes to ask him about his career, and about what advice he would give anyone seeking to emulate his astonishing journey through life.

“People should read the Financial Times instead of the Wall Street Journal,” he begins. Flatterer. But then things get more serious.

“You can over-plan things. Some people have ten year plans. I don’t. The best things that ever happened to me, I planned zero of them.”

Should you just hope to be lucky then, or is it about seizing opportunities when they come along?

Brilliant is warming to his theme, now. “You have to believe that one person can make a difference. I always quote Margaret Mead: ‘Never doubt that a small group of thoughtful, committed citizens can change the world. Indeed, it is the only thing that ever has.’”

Well, it’s easy for Larry Brilliant to say. He’s on first name terms with the Silicon Valley billionaires, he’s a media darling. Of course Larry Brilliant can make a difference, but what about the rest of us? I don’t say this out loud, but the question seems to be on his mind, perhaps because he found fame so early and in such an arbitrary fashion. After Alcatraz, he discovered that the world’s media treated him as though three weeks with native American protestors had made him the world expert on the subject of native American rights and culture. But that media glare was out of proportion to anything he felt he deserved.

“It starts with ordinary people. Ordinary people do extraordinary things, and then we lionise them. We make heroes out of them. And that’s a problem, because it makes other ordinary people look at these heroes and think that they can’t achieve the same things. But that path is open to everybody. Anybody at any time.
“There are so many wonderful people who, if they had the spotlight, their lives would read in the same wonderful way as mine. Sometimes I feel embarrassed about the attention. I mean, I wrote a book about eradicating smallpox, about being the mascot of the eradication effort, and everybody thought it was just me – that I single-handedly wiped smallpox from the face of the earth. But it’s a team sport. There were 180,000 people involved in India alone.”

“Think about Zafar Hussain. He was born in poverty, raised in poverty. He decided to become a sanitary inspector – his job was to test for shit in the water. And he became my translator. He risked his life many times because he realised the campaign to eradicate smallpox was something he could help with, something that he could do. He eradicated smallpox.