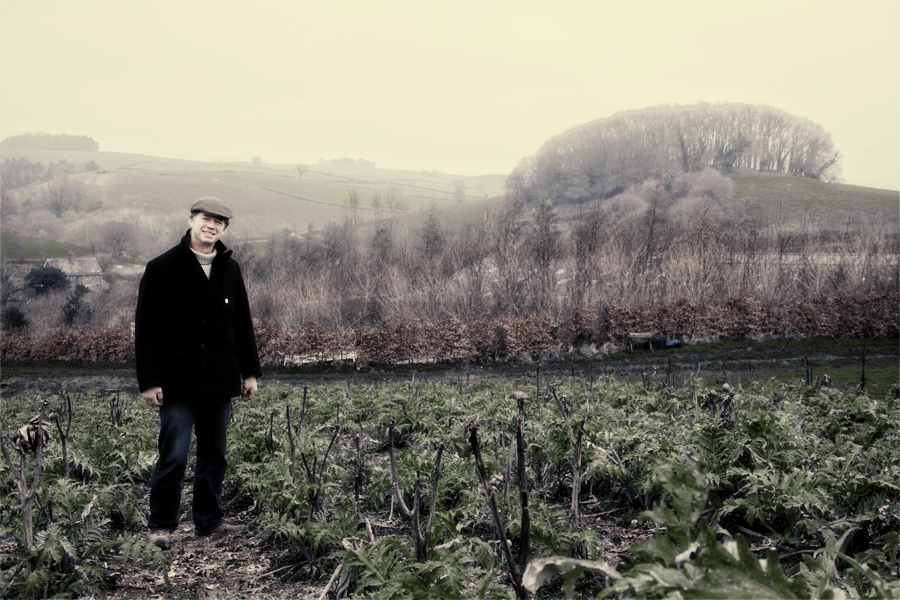 Guy Watson is the founder of Riverford Organics, a group of organic farms which deliver around 47,000 boxes of fresh organic produce around the country each week. By doing so, he hopes to encourage the nation to eat more home-made, seasonal food, at minimal cost to the planet.

I went down to Riverford Farm near Totnes in Devon, to meet Guy and see what a multimillion organic operation looks like. What I learnt is that this is a fantastic business, but such success does not come without personal sacrifice. I was also reminded that organic does not necessarily mean best all-round environmental option.

Although Guy started growing vegetables on his family farm in 1986, his story is far from a simple tale of a son following in his father’s footsteps. Guy is the youngest of five children; a position, he says, has made him spoilt and stubborn. He studied agricultural and forestry science at Oxford University before returning to his birthplace at Riverford, with the hope of taking over the family farm. When it became clear that he was not high enough in the family pecking order to win this honour, he left again to become a management consultant in London and New York. However, the desire to run his own farming business was strong and Guy was determined to show his father that he could do it. Aged 26, he came back home at Christmas and started growing vegetables on 3 acres of land, next to the house where he grew up: “Before I knew it I was out in the field with a plough”.

His father’s farm was not organic but an eye for an opportunity along with a sense of self-preservation attracted Guy down the chemical-free path. “I made myself sick from not being careful with pesticides and my brother was hospitalized with Paraquat poisoning.” Around the same time, “There was a bit of a buzz around Totnes about organics, organic veg in particular.”  Today it would take at least 3 years to gain organic status, in the 1980s, you could do so instantly: Riverford Organics was born.

At the outset, Guy was doing all the digging, ploughing and planting and then distributing the vegetables in his car boot to local shops. “It went from 3 to 18 to 50 acres quite rapidly. I was so driven. For the first 5 years I worked 70 or 80 hours a week and then went back to my room and collapsed. I had a demonic determination to succeed and prove myself.” The hard work did not stop there: “By the time I was thirty, I was married and started a family and I continued to work ridiculous hours. For ten or fifteen years. If I’m perfectly honest, the business came first. I don’t ever want to work like that again in my life.”

Back in the late 1980s London was the big market for organic food, but logistics were troublesome and unreliable. Trying to coordinate with passing lorries was a nightmare. Guy tried negotiating with the big supermarkets to become a supplier, but a fair deal was impossible to obtain.

Two organizational innovations were critical in Riverford’s successful development. The first was the idea of a veg box delivered to the customers’ door, inspired by some other local organic farmers, in 1993. This was something unusual at the time, but it quickly caught on. “For the first few weeks I did all the deliveries myself and I knew immediately that I was on to something. The people were really interested in the product.” The second important innovation was linking up with other farmers in a producers cooperative. From 1997 to 1999 Guy worked with ten other farms to become organic, and provide the variety and quantity of produce that was needed to fill the boxes.

Business really took off when they gave up on supplying supermarkets and decided to focus on the boxes. “Between 2003 and 2007 we went from 4 or 5 million to 30 million pound turn over. It was very stressful and probably one of the most miserable times of my life.” Are these the inevitable costs of success? Guy Watson’s marriage broke down a few years ago, and he now wistfully comments on his somewhat belated appreciation of time spent with his children. Guy reflects that there is no easy way to do what he has: “What I’ve achieved has come at great personal cost. I’m not sure what I would have done differently. Lived a lesser life perhaps….”

A few years ago Riverford took on a Chief Executive, so that Guy could have more time for his personal life and work on some of the more thorny strategic challenges faced by his business. Getting Riverford’s environmental performance right is clearly one such tough issue. Their largely middle-class and environmentally-conscious customer base expect that an organic vegetable box is an all-round, positive environmental offering. However, the trade-offs between different environmental concerns are complex. Unafraid of an intellectual challenge, Guy worked with Exeter University and uncovered some surprising facts: The cardboard boxes they deliver their produce in – well designed, 98% recycled materials, easily folding and reusable (up to 10 times) – have a greater carbon footprint than their entire UK haulage fleet and using plastic crates would be better; Using biodegradable bags, which cannot be recycled, is worse than using plastic bags; As the climate changes and becomes more unpredictable, it is better to import food from kinder climates than to try and grow locally and ultimately waste crops.

Guy claims that many customers are too prejudiced to take on these conclusions. This is disheartening but probably realistic. Considering this lack of consumer push, the costs of change are often too great. For example, switching from cardboard boxes to plastic crates would take a £1 million capital spend and a massive logistical overhaul. In a tough business environment this is a difficult step to take. Last year Riverford lost 30 to 40% of production because of the bad weather. That was the equivalent of about 300 pounds for every acre. Even with climate change having such a direct and negative impact on their business, it is difficult not to focus on more short-term business pressures. On the day we met it was actually IT that was top of the agenda. “It’s crippling our business”, Guy sighs.

I leave Totnes struck by the how difficult it is for a business to truly minimise their carbon emissions. We still operate in a world where the true cost of carbon is not accounted for. Until that changes, businesses will focus on the factors that we do value in our society. Guy himself has undoubtedly made a massive contribution to fuelling the nation’s appetite for good quality, fresh, organic food. It shows what a thoughtful man he is, that our conversation has made me as aware of the environmental pitfalls of what he is doing, as much as it has the benefits.