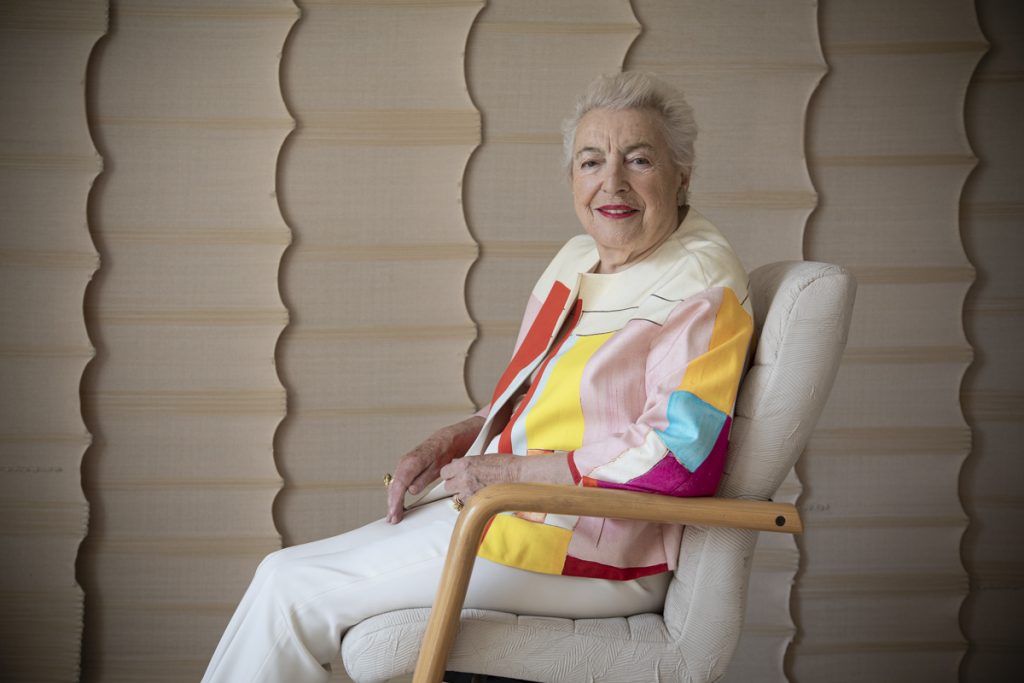 Don’t let anything stop you

What a thrill it was to meet Dame Stephanie Shirley in August. Not only because this was the first in-person portrait I had made indoors since the start of lockdown, but also because she epitomises what I am hoping to capture on this website. She is someone who has persistently overcome obstacles to make a positive impact with her life.

Dame Stephanie came to the UK on the Kindertransport from Vienna, aged 5, accompanied only by her elder sister. She was fostered by a family in Sutton Coldfield and settled in well. She was interested in maths, but her all-girls high school did not teach it (the only science subject thought respectable for girls then was botany) so she passed an assessment to receive tuition at the local boys’ school. She was not able to go to university but decided to find a technical job instead. She worked on early computers at the Post Office Research Station. There she met her husband Derek, a physicist. Once married, she hit a glass ceiling at work again, and so decided to set up her own company, Freelance Programmers.

The company initially employed only women and allowed them flexible working patterns to combine with their domestic responsibilities. In the 1960s and 70s, this was cutting edge employment practice. At this time Dame Stephanie started referring to herself as Steve on business development letters. She found she was much more successful at getting through the door of potential clients that way. Only once the Sex Discrimination Act was introduced in 1975 did she start employing more men.

As the company grew, eventually to 8500 employees, Dame Stephanie was able to leverage her financial power in innovative ways. She gave away 25 percent of the company to the employees, 70 of whom eventually became millionaires, many of them women. The company floated in 1996 and at one time it was worth $3 billion. Since retirement, aged 60, Dame Stephanie has invested much of those funds, and all of her considerable energy, into philanthropic causes.

The first thing that struck me when I arrived at Dame Stephanie’s house is how welcoming, bright and enthusiastic she is. You would never guess that she already has 87 years behind her. She puts it down to healthy eating and exercise, but I suspect that her desire to keep on contributing to society has a lot to do with it as well. She talks about her belief in the beauty of work – it’s not something she does when she’d rather be doing something else. Her work is her life and it appears to be incredibly fulfilling.

I was curious to find out how an active woman like Dame Stephanie had coped with lockdown. Had it been terribly claustrophobic to have one’s freedom restricted at this point in life? One disappointment was that the Hollywood movie of her life has been postponed. She hopes it will happen next year “but at this point in life you never know”, she pragmatically told me. However, far from sitting still and feeling regretful, she decided in March that she needed a project to keep her and her team engaged and busy. As a result, So To Speak, the book of her speeches which she has put together during lockdown will be published in October. She adds that one of the challenges she sees about getting older is to “look back only to learn and not to regret”. This kind of book endeavour accomplishes that and Dame Stephanie is still very active on the speaker circuit, so she has lots of opportunity to put any learning into practice.

This is a woman who has had a lifetime of turning the most difficult situations into something positive. She still displays those characteristics today. She pointed out how the pandemic has hastened changes which she has long called for. A long time advocate of distributed working, she noted that it looks to be the inevitable future of work life now.  Training is another thing Dame Stephanie believes will stay on-line. “It’s 90 percent as good, but so much more accessible.” I’m sure she’s right, and it’s wonderful to meet someone with so much experience behind her, who is still able to embrace change with such enthusiasm.

I also wanted to hear about which achievement Dame Stephanie is most proud of. There are many, and I have only skimmed the detail of them in the paragraphs above. For the past 25 years she has been investing her time and money in projects mostly related to information technology and autism. Of all of them, she highlighted the establishment of the Prior’s Court School for autistic children as the most rewarding. The residential school for almost 100 students, with 600 staff was set up in the year following the death of her own autistic son Giles. He died of a seizure, aged 35. Dame Stephanie loves to visit the school now. Just being there makes her feel very happy. I am not surprised. I have often found in these How to Make a Difference interviews that people with a personal connection to a cause, care for it most passionately.  Dame Stephanie has certainly managed to turn her personal tragedy into a positive for others.

As our conversation drew to a close, so that I could make portraits, I reflected that it was wonderful to meet such an energetic woman at this stage in her life. Still so engaged with the world, and doing her best to have a positive impact. How to be such a person in your eighties? Take care of yourself, but keep working hard on what you are passionate about. That will take you a long way in the right direction.

If you would like to find out more about Dame Stephanie’s amazing life, I highly recommend her excellent memoir Let It Go, or the new anthology of her speeches, So To Speak – all the proceeds from both go to Autistica, the medical research charity she founded.