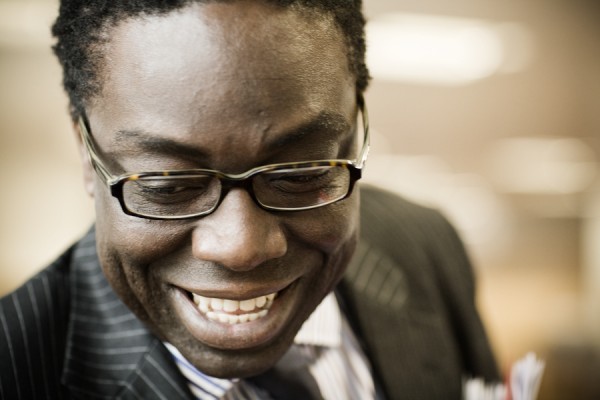 I first met Victor about eight years ago when I was working for Shell and he was running a youth homelessness charity called Centre Point. I was really impressed by his commitment, and his passion for all kinds of social justice. Since then his career has sky rocketed: He has become one of the People’s Peers and the Chief Executive of Turning Point, an organisation which cares for people affected by drug and alcohol misuse, mental health problems and those with learning disabilities.

This time I had the chance to interview and photograph Victor for a programme which I am making about social entrepreneurs for the Community Channel.  I wanted to see him in both his work environments, so first I met him in his Turning Point office in Aldgate and then at the House of Lords.

Victor is a particularly interesting person because he bridges the divide between politics and the voluntary sector; He is not typical of either. Since he became a People’s Peer in 2001, Victor has certainly stood out.  As Victor puts it: “Six foot black guy from Wakefield who isn’t rich, didn’t go to Eton, Oxbridge.  Isn’t a lawyer.  What the hell is he doing here?” Nevertheless, after a lifetime of campaigning, he was more than happy to become a Lord when he was invited to.  Like Vince Cable, he recognises the importance of participating in the political process.

Since he has been a Lord, he says he has been impressed with how hard working his fellow peers are and he believes their advanced age is an asset. “I’d rather have social policy made by somebody who’s been around a bit, than some 24 year old Oxford graduate who wants to be a politician.”  He has no time for those who would like to see an end to the House of Lords or criticise it for its traditions. “The people who want to bring it all down will have to come up with something else, and will meet the same challenges.  How do you actually maintain the trust of people who aren’t in the halls arguing, shouting, screaming and yelling?  How do you keep most people connected with the process?  No matter how many revolutions you have, that’s what you’re going to have to deal with.  So you might as well deal with it in this system as any other.”

Victor stands out from the voluntary sector crowd as well.  Turning Point is becoming increasingly successful and has been winning more and more contracts to provide social care in Britain.  What’s the secret of their success?  Victor says it’s because he runs his organisation more like a business than a charity.  Turning Point is also able to provide a basket of services. “Because people do not generally have one challenge.  People who have substance misuse challenges also have mental health challenges.  People who have mental health challenges also have substance misuse challenges and people who have learning disabilities may have all three.”

So, Victor makes sure that his organisation can provide “bespoke packages for individuals” through their connected care centres.  They are also working hard to address the “inverse care law”.  The inverse care law states that people who need services most tend to get them least. “Generally it exists because people don’t understand how to use services that are available and those services are not usually designed with those people in mind.”

Like many of the people who I speak to, Victor is impressive in his energy and absolute devotion to his cause.  Before I left him he gave me this convincing explanation why:

“We won a contract last week to provide some learning disability services and I know that our model is going to provide better outcomes for clients.  A few months ago we won a service in Somerset which is providing substance misuse services for large chunks of the county.  We’ve reduced waiting times and increased access to services, by a significant amount, which means we’re going to save lives and turn lives around.  So that’s what I get up for really. I find that a really useful thing to do.”