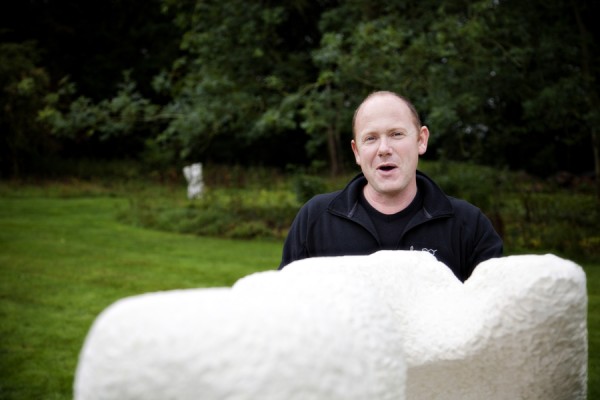 I interviewed the sculptor Jon Edgar as we walked between his sculptures in the gardens of the former estate of Jane Austen’s brother, Chawton House, Hampshire. It was a rainy day in August but it felt like such a privilege to have an artist explain his creative works in person. He told me how the deeply intertwined figures, carved from large blocks of stone and wood, had emerged from a process of improvisation. Rather than approaching the block with a preconceived idea, Jon works with the materials, turning and moving them as he carves, until images emerge from the block. His blocks are often reused materials from interesting sources: Like a pedestal from Prince Charles’s garden at Highgrove House or a log from James Lovelock’s garden. Jon says that what emerges from the blocks is a form of self discovery “The bits out here are the equivalent of going to look at a monk in his monastic cell. It’s just someone dealing with their life.”

Jon originally trained as a landscape ecologist and designer, but after ten years of countryside management and landscape projects he wanted a change. “I’d been working for a local authority, doing good things but then I had this awful realisation it was all about mortgages, business planning and managing people and my creativity was going down and down and down. Perhaps the trigger was one relationship ending and I thought I’d got nothing to lose.” So Jon signed up for a two year course at the Frink School of Figurative Sculpture. That was ten years ago. Now Jon has two distinct bodies of work. The large blocks which we were looking at in Hampshire and what he calls his terracotta “sketches”. These are heads which he creates while spending four to ten hours with a sitter.

What has his work got to do with the making a difference? I was intrigued by a series of heads of well-known environmentalists that Jon has created. He wanted to capture eminent environmental thinkers who are ahead of their time, and who are not normally the focus of today’s celebrity culture. People like writer Richard Mabey, moral philosopher, Mary Midgley and scientist James Lovelock. He has also “sketched” environmental do-ers like the conservationist Lady Scott and Tim Smit from the Eden Project who I also interviewed recently. “I’m not seeking to aggrandize or flatter the sitter. The main thing is that the terracotta comes into existence.” Jon explains. “There’s not a conscious desire to make a difference but there’s an energetic impulse within me. I would like to think that the portraits have a role in people thinking about why we have believers in one thing and believers in others.”

While carving his more abstract works is a fairly solitary occupation, the heads fulfil Jon’s gregarious side. It is not a standard commissioning process just a request that each person gives a bit of time. Jon says he enjoys the opportunity to spend time with his sitters. “It brings about a day with people who I care about. It’s a real privilege to learn more about them. It’s almost like a doctor patient relationship for that time. They’re sitting and don’t have much else to concentrate on.”

Jon is using his skills to promote the work of these people who he considers important. He gives his time, as do they. He is proud of the fact that these are not commissioned works. In many ways, Jon and I have similar aims. It’s a real treat to meet someone who can also see the value in portraying inspiring people, just for the satisfaction of the process itself and not for financial gain. I’m also delighted to have been introduced to Jon’s more abstract work, which I love. If you want to see the blocks on display they will be at Chawton House until October 31st.