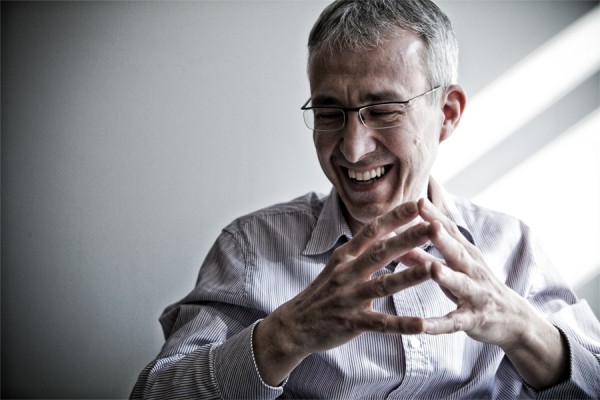 Every year the influenza virus changes a bit. Sometimes it changes a lot. That is because it is what is called an emerging virus. That’s why it is possible to catch the flu year after year. Every year the body needs to create a new set of antibodies to fight the virus in its new form. Until recently it has taken scientists around six months to create a vaccine against each new strain. This is a problem because a lot can happen in the viral world in half a year. Even though a group of scientists do a pretty good job of predicting which strain will be most prevalent the following winter. A totally unexpected variant of the virus may emerge. Ervin Fodor and three fellow scientists, have developed a technique which makes it possible to create a flu vaccine in a matter of days. This is great news for vulnerable people who may have found themselves previously unprotected from this potentially fatal disease.

I met Ervin Fodor, Professor in Virology, and one of the world’s leading experts on the flu virus, at the Sir William Dunn School of Pathology in Oxford. It is a surprising piece of modern architecture hidden behind a Queen Anne style façade where the clinically useful form of penicillin was first developed. Ervin first came to study here from his home of Czechoslovakia in the early 1990s under the supervision of Professor George Brownlee. The professor was impressed with the young student’s scientific ability, although wondered how he would manage to write up his research with such terrible English! They overcame their communication barriers to make this major breakthrough in vaccine technology, along with two colleagues from the US: Peter Palese and Adolfo García-Sastre.

By the time I met Ervin, his English was perfectly fluent. He was able to explain with fantastic clarity the process by which the flu virus replicates itself within the human body and how scientists create vaccines to stimulate the production of antibodies that will protect us from the illness. Ervin developed a fascination with the flu from an early age. As a secondary school student in the 1980s an enthusiastic teacher sparked his interest in the emerging science of biochemistry. This continued through university until he took up his first research position at the Slovak Academy of Sciences in Bratislava: “Finally I got down to all these technologies, growing viruses, injecting embryonated chicken eggs..”. After a few years of working for his PhD there, history intervened and the Iron Curtain came down. Opportunities suddenly grew and Ervin won a Soros studentship to come to Oxford for 9 months and study with Professor Brownlee.

Professor Brownlee was able to give Ervin his dream project. “I worked on a machine looking at how the flu virus copied its genetic information. I was already fascinated by this in Bratislava, but we didn’t have the technology there.” Brownlee decided to gamble on Ervin’s English improving and enrolled him on a PhD. “I was lucky, I hit on an interesting problem. I wrote a few papers that became rather high profile about how the copying of the genetic information was regulated at a molecular level.” Ervin puts a lot of his story down to luck, but I suspect hard work and determination have something to do with it as well.

Once his PhD was finished Ervin tried returning to what was now Slovakia, on a Wellcome Trust International Development Fellowship. However, he quickly realised that the infrastructure was still lacking and work was difficult. “I got spoilt here”, he told me. So he said “Yes” to an offer from Peter Palese to go to the Mount Sinai School of Medicine in New York. That’s where he started work on creating the influenza virus from scratch using a plasmid DNA. After less than a year, Ervin was offered a five year Post Doctoral Fellowship in Oxford by Professor Brownlee which was too good to turn down. So, he took the influenza virus research with him and made a breakthrough shortly after arriving back in Oxford. It was the late 1990s and they had worked out how to genetically modify the influenza virus to create a vaccine in a matter of days rather than months.

Of course that is nowhere near the end of the story. The patent offices of the academic institutions involved took over. A company in the US bought the patent to the technology and is using it in a nasal spray and has been for about 7 years. It has also made its way to Japan and the Far East and has recently been approved by the EU.

Ervin says that at the time he was absolutely obsessed about resolving the conundrum that would enable this artificial creation of virus. “What drives me is the understanding. Understanding how the virus really works at the molecular level.”

He says he is feeling a similar drive to resolve his current flu related puzzle. He and his team of about ten researchers are now trying to understand how the genetic information within the influenza virus replicates itself and therefore allows the virus to spread throughout the cells of our body. This structural knowledge will enable the creation of more effective drugs to treat influenza. It’s important stuff and fortunately Ervin says he has a trust in himself to succeed. Watch this space and we can all hope for far fewer flu induced aches and pains in winters to come.