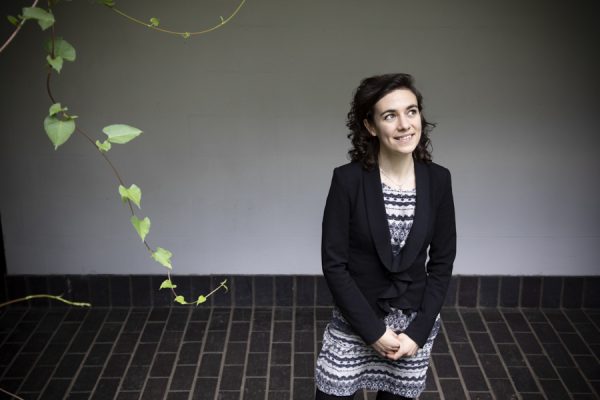 Things are so bad now, that anything you do to solve the climate crisis has got to help. That’s the way Nina Klein feels about the climate change situation, and it’s the advice that she would give to others who want to make a difference in this pressing field. Be a climate scientist, work in government or industry, become an architect or a lawyer, but most importantly spread the knowledge that we need to reduce our carbon emissions significantly, if we are going to maintain life on this planet as we know it.

Nina was clutching her bound PhD thesis when we met at Wolfson College, Oxford. She has recently finished four years researching the latest photovoltaic technologies. Her description of solar panels which can be printed on rollable plastics, so light and flexible that they could even been incorporated into windows, resonated with me as I remember speculating about such technology 20 years ago, when I worked in the scenario team at Shell. That technological prediction has become a reality, but so too have the worst possible climate change scenarios and the need for urgent action.

I asked Nina for an interview about “How to Make a Difference” after reading a great book last summer called The Switch by Chris Goodall. It was the first optimistic book about climate change that I had read in a while, as it explained how the switch to renewables really is within reach. Nina and her research into photovoltaics are mentioned in the book and I was keen to hear where it had taken her and whether she shared Chris’s optimism about renewables and the future.

Now that her research is complete, Nina is working for the Department for Business, Energy and Industrial Strategy as an energy engineer. Her role is to advise policy makers on the latest technological developments in renewables so that they can in turn make effective evidence based policy. Nina is happy to be applying her scientific expertise in the “real world” but also admits that she is now starting to understand why making change happen at the speed required is so challenging.

Nina loved science from an early age and studied Natural Sciences at Cambridge. While she was there she became involved in campaigning around environmental issues and in particular the Cambridge Zero Carbon Society, which wants the university to divest from fossil fuels. Her PhD at Oxford gave her a more technological perspective on potential routes to resolving climate change. She was looking at how to improve the material qualities of those rollable, plastic photovoltaic cells.

Despite her technical background (or perhaps because of it), Nina is clear that what’s needed right now is not more technological developments: “We should be deploying what we have already, as fast as possible, on a global scale” she says.

Nina sees a great galvanisation of human spirit that is epitomised by Extinction Rebellion and personified by David Attenborough and feels some hope. She is also deeply concerned that every piece of scientific evidence seems to get worse and worse. But what are we going to do? After my years of working for Shell, I had always assumed that change had to come from government. Nina is working for government, and is reluctant to be pinned down on where the change needs to come from. Government, the general public and business are all going to have their roles to play, she believes.

What about a carbon tax? I try and suggest helpfully. “That might solve climate change, but not all the other problems that we have like water scarcity and inequality,” Nina responds. At this, I am feeling that things are even more hopeless, but luckily Nina is still upbeat saying that the youth have an “incredible opportunity to demand change, as they have access to the science and knowledge, but not the vested interests in current systems.”

Nina’s further advice: “People created this. If we can understand people and how people work, maybe we can understand how to get out. Go and study history and social psychology. If you understand the transformation of the Industrial Revolution, then you might be able to understand the next change that is needed. Everything has a role. Follow whatever you are passionate about, then see if you can use it to make a positive change.” Now, that’s advice I can live by.