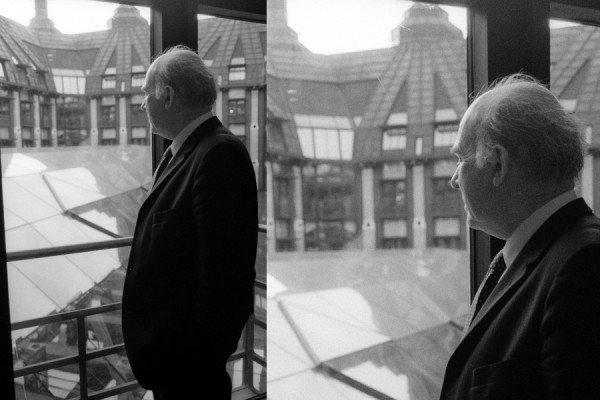 I met Vince Cable several years ago, when I was still using my old Minolta film camera and when my daughter, who started school this week, was still kicking in my tummy.  Vince has also achieved a lot during the past few years.  He was already the Liberal Democrat Shadow Chancellor when I met him, but now he is Deputy Leader of the Party. For two weeks he successfully stood in as Leader in 2007 when Ming Campbell resigned.  In these times of economic turmoil, he has also gained himself a reputation for being an incisive and trustworthy commentator.  Not characteristics usually attributed to politicians.
When I talked to Vince I wanted to know why he had chosen politics as his way to make a difference.  He told me how he was strongly influenced by his father who “was a Thatcherite long before Mrs Thatcher had ever been heard of, and very nationalist. Very kind of flag waving. A very firm supporter of Enoch Powell”.  Vince was opposed to many of his father’s views and it was having to argue against them, particularly when he married an Indian woman, that helped him to “develop a political awareness and an ability to argue and a feeling that issues matter.”

But political office didn’t come quickly or easily. Vince first stood for parliament in 1970 and was finally elected in 1997.  Arguably, the career path which Vince took to power is what has made him such an interesting and effective politician.

“I first got involved as a Labour activist in Glasgow. I was on the Glasgow City Council, quite a radical left-wing Labour council in those days.  I stood for parliament in Hill Head.  Eventually, partly for family reasons, partly because I didn’t really fit within the Labour machine in Glasgow, I left and got a job in the Foreign Office in London.  I did all kinds of jobs, and eventually went to Shell in 1990 and the last job I had there was their chief economist, before I got elected to parliament.”

“In the meantime, in my private life, I was partly bringing up a family – because I wasn’t in parliament it was easier to do that – I was doing my politics on the side and I got caught up in the Labour civil war and I joined the SDP.  I stood for the SDP and the Liberal Alliance, in 1983 and 1987 in my home town in York.  And then I stood in Twickenham, which was where I lived, in 1992. Didn’t get in then.  Then stood again and got in, in 1997.”

Vince points out two big advantages to having taken so long to enter parliament: “One was that I was able to spend more time with my wife and family than I otherwise would have done.  I had a reasonably contented domestic situation.  And the other was that I was able to do other interesting jobs.  Particularly the job that I finished up doing at Shell, was a major job in industry.  I was able to write books and do academic work at various stages.  So, I’ve done lots of things apart from being a politician.  Which meant that when I came into here I was probably rather better prepared to deal with real world issues than many other MPs.”

Vince is passionate about the role of democracy in creating a better society: “Ultimately things have to be achieved through consent and debate and that’s what democratic systems are about and if you believe in that, then the best thing to do is to get involved with it.  I find being an elected MP is a very very salutary experience.  You’re constantly having to justify what you do and what you say to a critical audience, among the people who vote for you. I find that accountability, constantly having to report back, explain and justify what I do, is a very good discipline, because it means you can’t ever be lazy.  You can’t say one thing in one context and one thing in another because people are watching what you do and what you say.  But I think, although people talk about cynicism in politics, it’s actually a very good system in many ways.”

When Vince was first elected, his wife, who was terminally ill, became very sick.  It was a challenge for him to just keep things going on the political front while he focussed on the important task of caring for his wife and their family during this difficult period.  However, since his wife died in 2001, Vince has become more openly ambitious.

“I’m much more single minded and I have higher ambitions.  I want to help my party do really well and make big advances.  I will hopefully be part of that process.  So, I’m no longer quite so defensive.  I’m no longer just concerned with holding my own seat and hanging on, but actually moving on and also shifting the debate in our direction.  Winning big political arguments.  I think is how I would define my ambition now.”
I think we’re already seeing the fruits of his labour.