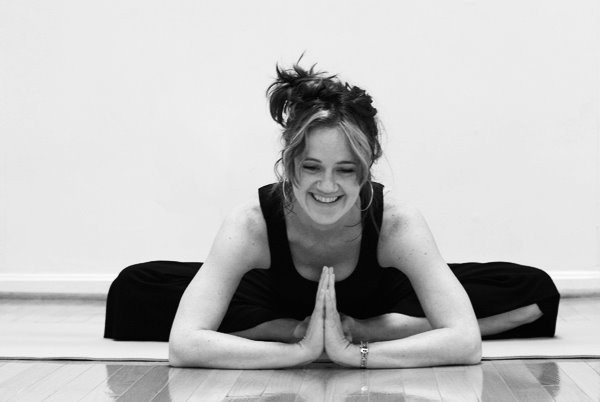 Kimberly Wilson sits comfortably as she talks, legs crossed on a bench decorated with polka dot pink and black cushions. We’re upstairs in the Washington DC yoga studio which she founded in 1999 and has been running ever since. “I think people have a desire to improve and change and grow but they have to have the means to be able to do that, and part of that is a creative and peaceful space where they can feel special. That’s what I hope Tranquil Space will always be.” She’s dressed in all black yoga gear, but isn’t short of glamour – appropriately for the author of a book called “Hip Tranquil Chick”.

Like many social entrepreneurs, Kimberly’s business idea arose from an unfulfilled need in her own life. “I wanted a place where people could come and really feel like they are special. I think of Cheers, where ‘everybody knows your name’. I think that’s so important.” In 1999 she couldn’t find such a place in her home town of Washington DC, so she set up Tranquil Space, with the aim of serving people who were also looking for a refuge through yoga. “The whole reason the business was created was to bring people together who I thought would connect and enjoy this type of a setting. We are here to help create a tranquil space within our society.”

She was propelled into social enterprise by dissatisfaction with her existing career. “I remember the Monday I came back to my job as a paralegal after spending two weeks having a fabulous experience learning to teach yoga in Santa Barbara, and crying. ‘This just isn’t me! I can’t do this anymore!’ I decided then that I’d just quit, live off my savings and teach yoga from my front room. It was scary. You go from getting a regular pay check and health insurance, to ‘Can I cover my rent and buy groceries?’” Family and friends were not entirely supportive, either: “‘What the hell?’ ‘Why did I put you through college?’ ‘What are you doing?’ That’s why I’m so proud of the success of the studio, because other people didn’t think this could happen.”

There’s no mark of those early fears on Kimberly’s face now, and she exudes the calm you’d expect from a experienced yogi. The success that enables peace of mind has come, as she puts it, in “baby steps. I’m a risk taker, but a baby risk taker. I’ve never taken out loans.” Her first baby step, when she reached her eighth student and could no longer fit them in her living room, was to rent a church hall. Now, although she insists “I don’t think I’ve got the full entrepreneurial spirit that I’d like to have”, her business occupies a bright and airy two-level commercial premises close to DC’s vibrant Dupont Circle and welcomes over 600 students a week. “You have to be profitable to survive or we wouldn’t be here,” she says, “but that’s not why the studio was created. I had no idea that we would make money, or that we would have this many students. No idea.”

Although evangelical about the benefits of yoga – “I think you walk a little differently when you leave class. People come to me and say that this place has really made a difference in their lives” – Kimberly’s horizons are broader. “ I think what we need so much in this world is to feel like we matter, that somebody cares, and that’s what I want people to feel like when they come here. I encourage the teachers to be as nurturing as possible – to touch every student, and learn their names – but also empowering and challenging. An overall theme of the studio is empowerment,” With that in mind, Tranquil Space runs regular “Trunk Shows”, which give local female creatives a chance to sell their own wares – “empowering women to create, to test the market and see if there’s a possibility for them to do this full-time.” There are also “creativity circles”, which “started in my living room, too. We have a lot of women do crazy things after it.” A fashion boutique and spa treatments presumably don’t harm the bottom line – “it’s really important to be a little indulgent here and there” – but are ancillary to the main purpose of “really helping, I mean honestly helping students to find a creative space. And also for us to translate this creative and tranquil space into society.”

It can’t have been an easy task to take to scale a business which is so firmly rooted in personal contact, but Kimberly appears to be pulling it off – the flask of tea and pile of cookies on a table crammed between brightly-coloured yoga mats continue a tradition that dates back to the home-made chai she served to her students after her first class. Her transparent lack of cynicism must be a major factor in avoiding a creeping corporate feel. This becomes apparent when I comment on the logos of four charities displayed on the wall as being the main beneficiaries of the Tranquil Space Foundation – trees, victims of domestic violence, female artists and animals – and compliment Kimberly on her marketing prowess in choosing a range of charities which will appeal to all her customers. “I never really thought about that,” she replies disarmingly. If it’s not for marketing purposes, then, isn’t it painful for a small and growing business to hand the money over? “There are times when we need more cash flow,” she admits, “but I’ve never thought ‘I wish I hadn’t given that thousand to the Humane Society.’”

As Kimberly slips into some poses for me to photograph, I ask how she finds the time to do enough yoga to maintain her incredible flexibility and strength while managing a staff of sixty. “I’m having tea with a girl tonight, and I think she’s the only friend I have that’s outside the studio,” she says. People who I knew before Tranquil Space, I haven’t seen them in years. I haven’t had time. There’s been many a seventeen-hour day since 1999. It’s been rewarding, but I would never say it’s been easy. Never.”

What keeps her going is the satisfaction of making a positive difference. “Being in business is great. I think a lot of times being in business is looked poorly upon, as if it’s all about money, or power. But I think you can be in business and really doing very, very good work and that’s what I really strive for. And I’m constantly striving to find out how to do that.”