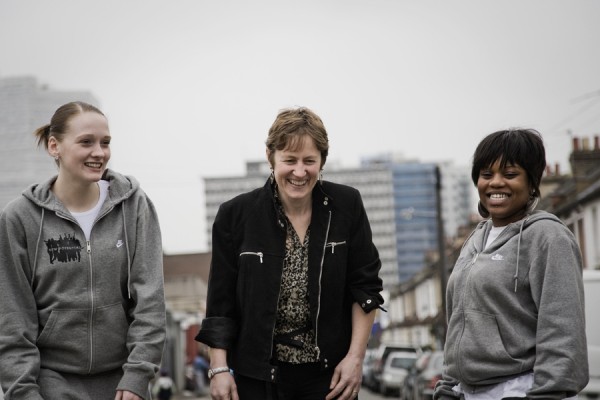 Rosie Payne was introduced to me by the Charity Bank; they wanted me to see one of their most exciting investments of recent years. Rosie Payne runs the Young People’s Project, a centre which helps teenage parents turn their lives around. The Project makes it possible for young parents, who often have not succeeded at school, to get an accredited education. They can put their children in the on-site crèche while they focus on all-important qualifications. Community midwives and careers advisors also work out of the YPP centre, making access to support as easy as possible. Volunteers do outreach work on the streets as well: “It’s all about engagement with young people who are not adhering to the mainstream”, Rosie explains.

I met Rosie at the centre in Ilford. A modern block where every inch of space is being used. Walls have been erected to create classrooms, offices and consultation rooms. We met on a day when there were no classes otherwise, Rosie tells me, there would have been no space to sit in.

A service like this makes such perfect sense that you would expect to find centres like Rosie’s all over the country; especially, as teenage pregnancy is rising in many areas. YPP is one of a rare breed however, and it only exists thanks to Rosie’s tenacity, passion and hard work.

Rosie was made redundant, back in the early 1990s, from her role as a professional youth and community worker. A friend asked her to help out at a toddler group on Monday mornings for young mums who had recently left care. Soon after, Rosie took over running the group herself. The young people were asking questions like: “What do I do if I’m having a bad day on a Tuesday?” and “How do I get to college?” Rosie wanted to help and managed to secure some funding which allowed her to move into central Ilford and run the group two days a week; the Project grew from there. They became a constituted organisation in 2000 and in 2005, thanks to a loan from the Charity Bank, they purchased their own premises. The Charity Bank loan meant that they could now run five days a week and are in touch with several hundred young people.

Another really valuable aspect of the Young People’s Project is their involvement in sexual education in schools. A group of young parent volunteers at the centre run the Respect Programme. I met some of the enthusiastic team and feel quite sure that they would be more convincing than the teacher with fuzzy felt who taught me about the birds and the bees at school!

Many of the young people who come to the centre looking for support, become volunteers and even employed by the project. This all helps build their skills and confidence. Rosie says that loyalty is high: “People come to me if they’ve been volunteering and say, “I’m really sorry. I’ve got another job and I don’t want to let you down”, but I really want the best for them and it’s about moving on.”

There are many reasons why teenagers get pregnant, but according to Rosie deprivation, poor sex education and media pressure are some of the key causes: “According to statistics, if you don’t have anyone who believes in you when you’re ten, then you’re much more likely to have a baby as a teenager. A lot of young people don’t have anyone around them to support them and they haven’t found school to be a place that they could develop in. They’re hard to reach, but they’re the ones who I’m trying to help.”

Seeing lives turned around makes it all worthwhile for Rosie: “Working with young people is fantastic” she tells me, even though she tempers that with, “it’s working with organisations and structures that’s challenging”. A sentiment shared by many social entrepreneurs who I’ve talked to.

After our interview I chat to some of the teenage mums who are around the centre. They are full of enthusiasm for the project and seem confident and happy. Rosie has clearly created an environment where these young people can grow and I leave with a feeling that these particular teenagers are very lucky to have found her.