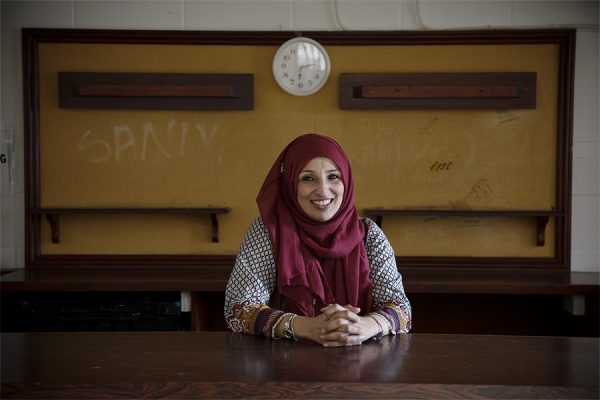 One early afternoon recently, Shabnam Sabir was to be found with a group of smiling volunteers tidying up the Asian Cultural Centre in East Oxford. The Oxford Homeless Project, which Shabnam set up, had just finished serving lunch to about 60 people in need. This is something she helps to make happen every other week.

Shabnam started feeding Oxford’s street sleepers during Ramadan in the summer of 2015. After the long, summer daylight-hours fast, she and her family would prepare great feasts of delicious Asian food. However, they couldn’t always finish what they made. One day, not wanting to waste food, Shabnam decided to pack up a selection of the tasty leftovers and drive them into central Oxford. Unfazed, she approached the first group of homeless that she saw and asked them if they would like to eat: “Their eyes lit up and they said ‘Yes please!’” Encouraged by her initial experience, she decided that she would go back the next night. It quickly became a daily routine and her friends also started giving her food. Over the month, she found that not only were people really enjoying and appreciating the food, she also loved the act of giving. Shabnam didn’t want to wait until the next Ramadan before doing it again.

So, came the idea of running a lunch club every two weeks. Amazingly, it only took Shabnam a few weeks to get things going. At first it was family and friends who provided two curries and some rice, but over time more and more people have come to donate. The local community centre gave their space free of charge, so that people could sit down somewhere dry and warm. Now between 50 and a 100 people are fed each session.

Shabnam has kept the process impressively simple. The aim remains the same, to give people something good to eat in an environment where they feel welcome. “We provide the simple compassion and humanity, engaging and listening to people.” Anyone can come and help, “Just turn up and do what you feel comfortable with. Maybe you want to be in the kitchen, or serving up, or just chatting to people.” Shabnam doesn’t ever worry about having enough volunteers, “We are always fine” she says. She realises that helpers will get as much out of the lunch as the homeless people: “Forget that you are coming here for someone else, it helps you too. Because it makes you realise how people struggle, it makes you appreciate what you’ve got and how easy it is to make somebody feel good. Just by sitting and having a chat with someone, it can make them feel amazing. It’s not hard. It’s doable and manageable, and most of all it’s just brilliant!”

Shabnam explains how she is driven by some of the basic tenets of her Muslim faith. “In my faith one of the best things that we can do is anything to benefit another human being. That can be as simple as smiling at somebody.” Shabnam’s willingness to smile is very much in evidence throughout our meeting, but of course she is doing much more: “Beyond a smile, you can say a kind word. If you can do more, use your hands to do something, that’s what we are doing here. Then, see what you can do to change things.”

Shabnam appears to live by her faith. As well as the lunches, she is very active in speaking out on behalf of Oxford’s street sleepers, and whenever possible looks after their practical needs. All of this is completely voluntary, alongside her job as a teacher of children with special needs, being a single mum to four children, going through the process to become a foster carer and from her Twitter feed, what looks like involvement in countless other community projects. I am in awe.

I ask if there are any plans for expansion of the Oxford Homeless Project. Shabnam’s faith is her guide again: “Our faith teaches us is to do something small and consistent, rather than do something big that cannot be sustained.” She finds that organising the lunch every two weeks is manageable alongside her many other responsibilities and she plans to continue like that “I have no intention of stopping it, ever.” Although, she quickly moves on to explain her dream to create a centre that is open for many more hours. “I’d like to do it every day, if someone would give me the money for that. I would love to open a centre where people could come, sit, eat, relax, use the internet and just feel like they have a home. Because that’s what they don’t have. I am nowhere near being able to do that, but maybe one day.”

Shabnam’s commitment and passion for the homeless of Oxford is so inspiring: “Even when I’m not here, I’m sending around messages, asking if people need things and collecting things and dropping them off. It’s not always easy. Sometimes it’s ten or eleven at night, and someone needs something but I still head out.”

She insists it is all worth it: “I really enjoy doing this. This is what life is. You can sit and make money forever and ever or you can use your day to do something useful. I like to make every day count. If I’ve spent one day talking to someone in need, that’s a day well spent. This has a purpose. This will benefit someone. It’s really important to see someone smiling because of a conversation. It’s something we can all do. We can all smile and say something nice.” Shabnam is so right!