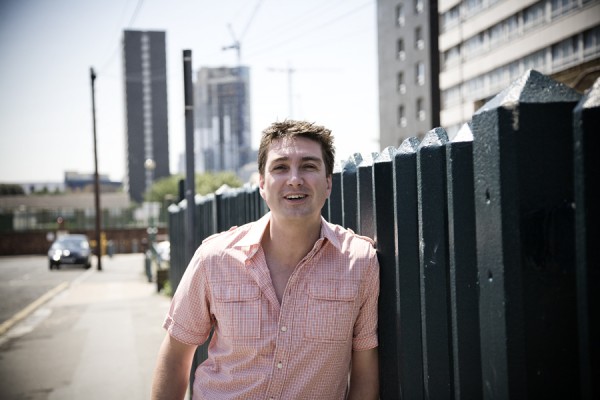 Can football make a difference? Street League uses the sport to help some of the most vulnerable members of our society get back on their feet. For someone who is homeless or without a job, maybe just out of prison, or suffering from an addiction, a regular game of football can help build the self esteem and confidence necessary to get their life together. At least that is what I am told by Street League’s founder, Damian Hatton. We met in their Stratford offices, in the shadows of the Olympic Village, East London.

Street League started in 2001, as a football tournament between 16 homeless hostels. At that time, Damian was an accident and emergency doctor at University College Hospital, London. He was troubled by the number of homeless people who came into the emergency department with multiple needs, and left again with little hope of being helped long-term.

As a young person himself, Damian had found sport to be a great refuge. “When I was 15, I had a fantastic rugby coach. I played six days a week and it had a very beneficial effect on my grades. I ended up going from the bottom to top of class.” So, when he saw NHS systems were not helping those in need, Damian thought he might be able to do something about it through the power of sport. “Whilst I was still on the wards, I dreamt up the idea of engaging people through a fun and healthy activity, working with lots of friends and contacts. So, I picked up a phone book with the hostels written in it and just rang around them all.” Damian organised six weeks of training leading up to a football tournament. Kit, equipment and transport were all laid-on to make participation as easy as possible. It was a huge success. “The homeless guys and their workers were saying: ‘This is fantastic! Great! We’ve never seen them so enthusiastic!’. We started to see some major breakthroughs with people.”

The next significant step forward was later in 2001 when Damian decided to take a year’s sabbatical. He was given some funding for Street League and the rest is history. “It’s the longest sabbatical ever!”, Damian now jokes. “It was an opportunity to go and do this, and so I just jumped. Once you’ve jumped, you figure out how to fly on the way down. That’s the only way to do things, otherwise nothing ever happens.”

While Damian loved being a doctor, he wanted more. “This is akin to me going into management and asking “How do you change the landscape?” It’s difficult to do that in a front-line job. I loved being a doctor. The people contact was fantastic. But I’ve always been an ideas person. I want to create and grow stuff. That’s where my ambition always lay.”

In its current incarnation Street League works with about 1000 people in London, Glasgow and the North East of England. They work in partnership with about 60 organisations. Players come from a range of disadvantaged backgrounds including homelessness, drug and alcohol abuse, displacement, unemployment, crime, learning difficulties and mental health. In addition to football, Street League runs self-defence and dance sessions, which also attract women to the project. About 20% of all participants are now female.

Once a player joins Street League, it’s more than just a game, as the organisation’s strap line goes. All individuals are encouraged to participate in a range of training from goal-setting to back-to-work skills and sports-based qualifications. Even those who want to choose a more “free flow” route, are still expected to reconsider their desire for employment at regular intervals. “We’re not here just for free football. If you’re interested in moving yourself onwards, that’s great, but we need to know what that destination is. It’s not time bound, and if you’re not ready yet we’ll check in again to find out if things have changed.” Once players do get a job, they can join Street League’s graduate league, which is run in the evenings and on weekends. “Sport then becomes recreational and an integral part of their success story. If you’re fit and well, you tend to have lots of other things going well in your life.”

Many of the players have been failed by the traditional systems of education, and not everyone is ready to be helped back into employment. “It can be very frustrating in this field of work, because you’re sometimes working with people who don’t want to achieve what you want them to achieve. But if they are ready, then we can fast track them through that process.”

And what about the future? Since I met Damian, Street League has already moved to bigger and better offices in Kennington, right next to the pitches of Kennington Park. Damian also sees huge opportunity for growth in football as a tool for development, both in the UK and internationally. He is on the board of Street Football World and through that sees how football is being used around the world by NGOs to help with issues as diverse as HIV awareness, women’s empowerment and conflict resolution.

Damian sums it up: “It’s fun. It’s healthy. It’s a bit of a no brainer to use sport as a social development tool. That’s perhaps it’s purest use in society.” I have a feeling he will have no shortage of volunteers to help him.