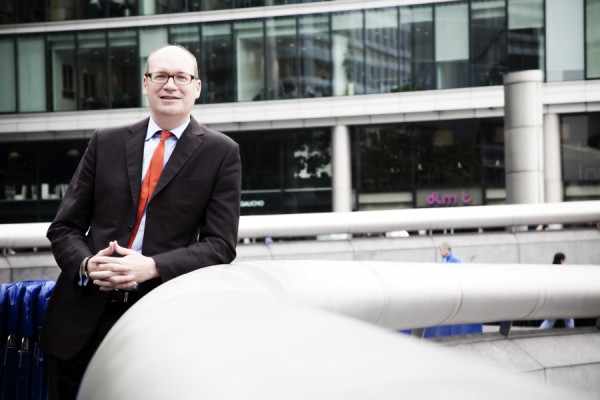 Invest in reducing greenhouse gases 27th of May 2010

One of the challenges I find with being both the writer and photographer behind How to Make a Difference is that moment when I have to switch between being interviewer and photographer. With James Cameron, I realised once again that the more interesting the conversation I am having, the more difficult it is to get a great photograph. James, who is a founder, vice chair and executive director of Climate Change Capital, has a truly impressive track record in the field of climate change. 45 minutes was barely enough to scrape the surface before we needed to dash outside for a quick few snaps (OK, excuses over!).

It was only just before the photographs that I discovered James role in instigating the Kyoto Protocol. In 1988, he co-authored an academic article which was the first to argue that an international negotiated agreement was the best way to use the law to resolve climate change. This article led on to a study into what such an agreement would look like: “We attached the research to an entirely made up group of countries: low-lying developing states. Then, we set about introducing ourselves to the governments of those countries and said ‘There should be an international climate change agreement. We could represent you and you won’t need to pay. It’s all pro bono.’” The Alliance of Small Island States was born and the negotiation of the Kyoto Protocol ensued. While we can’t yet look back and say climate change is resolved, the Kyoto Protocol has been a very important step on the path to controlling emissions. James’s ideas, followed by years of involvement in negotiations, have had a notable impact. I hope I didn’t miss anything else this significant in his past!

I met James in the library of Climate Change Capital, at the heart of the very impressive Norton Rose offices, just South West of London’s Tower Bridge. The view is over the Thames to the Tower of London and the skyscrapers of the City of London beyond. In this kind of situation, one realises that environmentalism has made huge steps towards the centre of how our society operates. James is quick to emphasise that much more needs to be done. “We’ve done a lot. Our capacity to make the revolutionary changes to our energy system and reorientate our economy is growing. But the things that we do are still very peripheral. The bulk of financial resources that are needed to make the transformation are still locked onto fossil fuels.”

A qualified barrister, James was a practicing legal professional until he set up Climate Change Capital in 2003. His work with the small island states was one of the first projects of the Centre for International Environmental Law (CIEL) which he helped to found. Later in his career James set up the climate change practice at the law firm Baker and Mckenzie. “I could not have imagined creating Climate Change Capital if I hadn’t done it before with CIEL, FIELD (CIEL’s UK offshoot) and the specialist practice in Baker and McKenzie.”

About ten years ago James, along with other climate change “pioneers”, saw the potential of a commercial enterprise which would invest in the global transition to a low carbon economy. A chance meeting with Mark Woodall, a former investment banker with considerable environmental expertise, led to Climate Change Capital taking off as a separate entity. “Mark had the clarity and wanted to start something new. Without him we wouldn’t have got going.”

Climate Change Capital now manages funds with over US$1.5 billion of commitments. They have funds which are directly targeted at reducing greenhouse gases, as well as more traditional investments, like property, which aim to invest with a “climate change lens”. James is proud of the team that he has around him: “We cannot deliver on the mission ‘creating wealth worth having’, unless everyone here is of a very high standard, whether they’re investing for environmental purposes or not.” On his own role: “They look at me and know that I’m not a professional investor but I am the creative force behind the business.”

James muses that it was probably the news of the Chernobyl disaster in 1986, while he was studying for a post graduate degree in international law at Cambridge, which inspired him to pursue a career focused on international environmental issues. “It was a perfect example of transboundary harm, which needed to be addressed through legal systems that crossed boundaries.”  Growing up as an expat in Lebanon and then Singapore was formative too: “All of my idealism and excitement about politics was fixed on power and abuse of power, and ultimately how to you reconcile competing interests where the state has a fundamental role, but where individual liberty is at risk.”

For now things are good. The business is going well and James is pleased to note that the new Lib Con coalition deal includes some elements that Climate Change Capital have been proselytizing: “I’m very happy at the minute with the space that I’ve got to be me, and the people I’ve got to depend on. When you see the potential of what you’ve created, and you reset your ambitions, then you have to work out when to let go, but that time hasn’t come yet.”