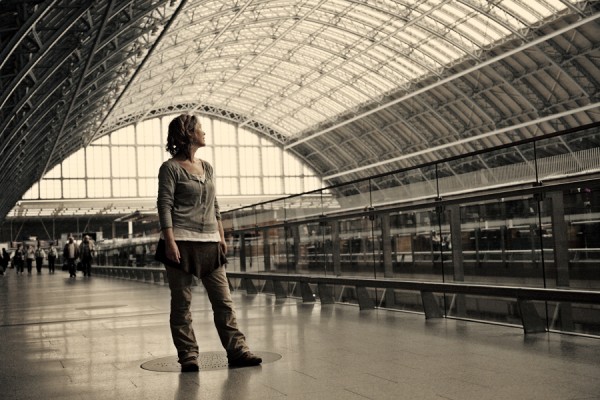 When I met Brigit Strawbridge in St Pancras Station, before the summer, she was at a crossroads in her own life. It seemed appropriate to meet her at this bustling transport intersection as she left one chapter behind and set off on a new path. Brigit was in a contemplative mood and had plenty of wisdom to share.

You might remember Brigit from the BBC TV show a few years ago called “It’s not easy being green”. She and her family lived with around-the-clock TV cameras as they searched for a more eco-friendly existence. Unsuprisingly, perhaps, media scrutiny left Brigit exhausted: “Afterwards, I spent about a year curled up under the duvet until I literally thought ‘Get over it!’”.

The show had re-ignited Brigit’s childhood love for nature: “I was desperate to put all my energies back into it. To make up for lost time.” She decided to pursue her passion by setting up a charity called the Big Green Idea. The Big Green Idea aimed to answer the thousands of requests that Brigit was receiving for practical advice about living a more eco-friendly life. She kitted out a double decker bus with all the latest green technology and materials and set off to spread the word around the country: “People are drawn to the bus like a magnet. The seats are hemp, we used sustainable woods, there are solar panels, the lighting is low energy, the floor is lino, the paints are green paints. It’s absolutely beautiful. And it does what I hoped it would do.”

Her Big Green Bus offered fun ways to inform all ages about green issues. But after three years, the reality of running a small charity and the constant search for funding left Brigit feeling burnt out once more. “I spent my entire time answering emails, following up contacts, making contacts that would lead nowhere, just filling in funding bids. Paying for an office and never having enough money to pay for myself. I was OK. It was just that everything became so difficult. You persevere because it’s what you set out to do, but my energy levels dropped and dropped.” So, when I met Brigit, she had just decided to do the brave thing and wind her charity down. She was looking for a home for her bus (Tim Smit’s Eden project came to the rescue) and is clearly relieved: “The weight has fallen off my shoulders. It’s almost as if my garden has responded. I’m starting to really feel my reconnection to nature.”

Brigit is now shifting her focus away from the big bus, to a very small, and yet incredibly important element of nature: the bee. Bees have been rising up the agenda of environmentalists in recent years. They are critical to the pollination of plants and their numbers have been plummeting. “If we lose the bees we’re doomed, we’re lost. And every single person can do something about it.” What does Brigit recommend? Plant more flowers, don’t use pesticide sprays, build a bee hotel, leave your lawn to grow and your garden to flourish. The bees will love it. She also urges us all to stop buying products with neo-nicotinoids – a pesticide many suspect is responsible for the collapse of the bee population. Brigit’s own favourite bee is the hairy-footed flower bee: “It’s an utterly beautiful, solitary, little bee”.

And so opens the next chapter in Brigit’s environmental quest. She’s writing a book about bees and their significance, and giving talks wherever she can. Local primary school children already know her as “The Bee Lady”. It’s a much more personal campaign: No office overheads, no staff, no big assets, just unwavering passion and commitment. Brigit is reinvigorated and we should all take note of her message. “Environmentalists are at risk of being crushed by the enormity of the problems we face. I’d love to campaign on lots of issues, but now that I’ve chosen to focus on bees I feel so much more energised.” Brigit will undoubtedly need all the energy she can muster for this campaign, and I wish her every success, for all our sakes.