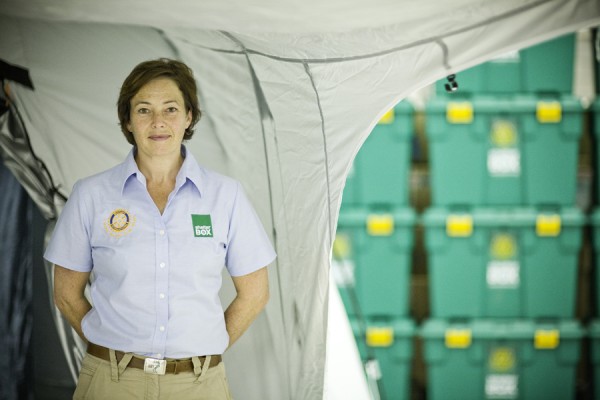 If you are wondering what you can do to help, as the people of Haiti await aid, please donate to ShelterBox, one of the most inspiring charities that I’ve come across in five years of interviewing people who are making a difference.

Last September, I was asked by the Media Trust, to travel to Cornwall to photograph Sally Grint, the Head of Development and Communications at ShelterBox. I was immediately capitivated by Sally as she spoke with such passion and conviction about the value of this charity’s work.

ShelterBox is usually one of the first aid agencies on the ground in emergency situations, like the one currently unfolding in Haiti. They use their military expertise – founder Tom Henderson is ex-military, as are many of their employees and volunteers – to transport survival boxes to the heart of disasters as quickly as possible. Each box has the equipment for a family of up to ten people to survive when they are left with nothing: A purpose designed tent, cooking equipment, water purification kit, bedding and other supplies depending on the nature of the situation. Each box costs £490 to fill and transport to where it is needed, with the support necessary to make sure the equipment is distributed and used to its utmost advantage.

Sally took me around the ShelterBox warehouse in Helston, where volunteers were packing the piles of equipment into hundreds of green boxes to ship to “holding” locations around the world. The boxes are dispatched in advance to sites near to disaster hot-spots, so that they can be deployed as rapidly as possible when needed. Thanks to the large amount of volunteer support that the charity receives, almost none of the £490 is spent on overheads; it’s almost all to pay for the equipment inside the box and for the transportation to where it is needed.

Trained ShelterBox response teams are mobilised to take the boxes into disaster situations. They travel with the boxes, and stay for 10 to 14 days to ensure that their contents are distributed effectively and used correctly. ShelterBox currently has 150 such trained volunteers around the world, divided between Europe, America and the Antipodes.

Sally herself is an amazing and deeply inspiring woman to meet. Within minutes of picking me up in the ShelterBox Landrover, she was sharing the very moving story of the last conversation she had with her husband, who had died five years previously. He was sick with depression and had asked her if there was any hope: “Hope for the future, hope at all in life, hope to be happy again?” After his death, Sally moved from London, with her two young children, to Helston so she could be near to family. Late one night, her husband’s words still ringing in her ears, she typed “hope” into Google and up popped an article titled “Hope in a Box”. The article was about ShelterBox and Sally was amazed to find that this “hope in a box” was actually located down the road from her in Helston. Having devoured all the information on their website, she turned up the next day to find out more.

Sally started work the following day as a volunteer. While in London, Sally had a very successful PR career, working with all the big labels of high fashion. She had become disillusioned with that world and saw in ShelterBox a way to use those skills to really make a positive difference in the world. She initially helped with fund-raising and trained as a response team volunteer. She was deployed to Bangladesh following Cyclone Sidr: “The journey of my role within ShelterBox begins with the families out there in Bangladesh who will still be recovering from their losses. One man who had lost his wife and eldest daughter held my hand and said ‘I prayed and someone cared’; a sentence that has stayed with me, putting the box into perspective. It is a tent, some tools, some vital equipment but it’s the getting it there that is so important. It’s the packaging up of so much effort from so many people. It’s an incredible box.”

Now Sally heads up ShelterBox’s communication department and has helped transform the organisation’s press relations, as it has grown in recent years from a small charity into a major aid industry player. This week, I am sure, she will be incredibly busy trying to tell stories which will bring in funds, so that they can get more of these life-saving boxes to those who need them in Haiti. Having seen their operations in practise, I know that money given to them will directly help those most in need at this time. Please think about donating something to their efforts if you can.