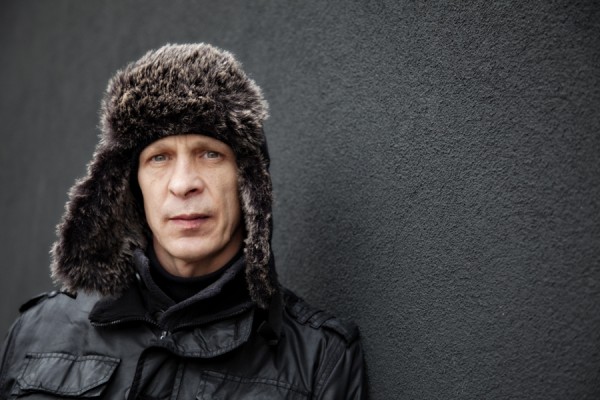 “I’ve had a few labels in my life: juvenile delinquent, maladjusted, crook, coke head, alky, drug dealer and prison reject..” So says Gary Staniforth, another of the fantastic characters who I met recently while making portraits for the Media Trust. I did wonder if I was crazy traveling all the way to Bradford with my then 6 month old son to meet this guy, but it was well worth the nine hour round trip. In recent years Gary has turned his life around in a remarkable way.

Four years ago Gary was homeless, addicted to cocaine and dealing drugs. Gary is very open about the childhood that led him there: a father who was violent when drunk, and being taken into care age 8, certainly contributed to his downfall. While in care he was subjected to emotional and physical abuse. He remembers being made to stand outside all night in his pyjamas in the rain, and being jumped on by support workers from table height. This horrific treatment unsurprisingly made the adult Gary angry and unwilling to trust.

Gary had three children of his own, but after 17 years his relationship broke down and he felt he must leave his family home. He stayed on the floors of friends and family for some time but eventually lost his job, partly due to the instability of his living circumstances. In 2008 Gary found himself living in a Salvation Army hostel, unable to spend the time that he wanted with his children, and with no prospect of the situation changing soon. He didn’t qualify for any “high priority” housing lists, and says, like many other single males in the hostel, he felt like the “hidden homeless”.

“I remember wandering around the town centre, feeling isolated and alone, desperate and like my life was over. The pain of being separated from my kids was unbearable. I was angry and frustrated but tired and weak with it all, ready to just give up. I very nearly joined the Salvation Army residents drinking club but knew I had to do something. So, I got myself some cardboard, wrote out some slogans and stood on the City Hall steps in protest in the rain, snow and sleet. I was on my own for 2 days and then a couple more from the hostel joined me. For 3 weeks every day we sat on the City Hall steps collecting signatures and talking to people.”

Gary and his friends collected over 300 signatures and handed them to the council. He wanted to highlight the fact that single males like himself who aren’t in any drug rehabilitation programme, or probation scheme, or on other priority housing list feel forgotten and discriminated against. Gary was asked to speak to the next council meeting and his words received a standing ovation. This was when Gary’s life started to turn around.

After being rehoused, he was asked to contribute to Bradford Council’s homeless core group, and various other service user committees. He’s completed an NVQ with the Chartered Institute of Housing. Gary has led several creative projects with the aim of destigmatising homelessness and providing homeless people with a creative outlet. He helped put together a book called “Forgotten” which was nominated and highly commended at the national charity awards in London 2010. He was also involved in a film called “Hidden Voices” and a billboard campaign around the Bradford District. He is the editor of a magazine and he is now setting up his own social enterprise “The Hidden Homeless”, which will work with homeless people to renovate disused properties around Bradford and bring them back into use.

Gary is infectiously enthusiastic for his projects and the direction his life is taking. “Now I have a few labels I’m proud of,” says Gary, “Active citizen, community learning champion, service user rep, company director, magazine editor and friend.” I bet his kids are proud of him too.