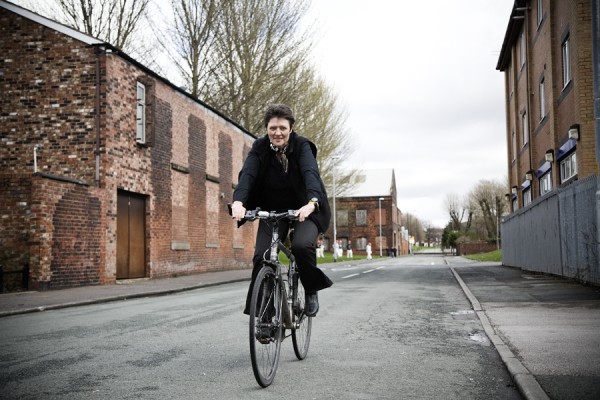 “If you want something doing, ask a busy person.” Liz reminds me of this old adage as I wonder how on earth she managed to juggle her four young children, a full time job and a start-up company in her basement. I think that an amazing propensity for hard work might also have something to do with it; that and a passion for what she does, and I can see why. Liz’s company BikeRight trains about 12,000 people a year to ride their bicycles safely on the road. School children, policemen, firefighters, street wardens and anyone who wants to, can sign up for a course. Manchester’s roads are safer because of it.

In the 1990s, there were only 20 cycle training courses each year across 168 Manchester primary schools. Now, thanks to BikeRight, there are 30 courses a day. Liz started working on her mission in 2000 when she discovered that her children’s school, the largest primary in Manchester, ran one cycle course every three years. “You were lucky if you got trained at all, and if you did, it was never on the road,” Liz explains. Things had not changed for many years. Liz recalls her own cycle proficiency training around cones in the school yard: “Afterwards I got a brand new bike and then I cycled 3 miles to school on the road.” Few parents would feel happy with that situation today and Liz wanted to do something better for her own children.

When her youngest child was two Liz decided that she did not want to go back to her former career, working with children in care. “It all felt too much and so I looked around for something else to do,” She says. Liz started an access course at the local college in IT and then got a place at Manchester Metropolitain University. Three years later she came out with a first class degree.

At university, Liz had already started working in her spare time on BikeRight. It was set up as a community project as part of her partner’s company, Infrastruct. Bouyed by an initial grant of £5000, Liz and some others trained as playground cycle instructors and started to give some cycle training at after school clubs. At the same time a Department of Transport review of cycle training, nicknamed the “shambles” report, was released. Liz’s business grew as a national standard for cycle training was being developed. She played a major role in pushing that along. Now all instructors have to be trained to meet that standard (as Liz says “would you send your child swimming with someone who couldn’t swim?”) many of them by BikeRight, and training takes place in real life situations, on the road.

With a staff of 50, offices in East Manchester and monthly outgoings of £40,000, it’s a far cry from the days in the basement. Liz seems surprised about where she’s ended up. “I never expected to have this as a business” she tells me. But she also adds that “If I want to do something, I want to do it properly”. This is one reason why they made a strategic decision only to train children in Manchester. They wanted to ensure that their training standards remained high. For Liz it’s also about gaining respect from the business community. “We started off as a not for profit business but no-one used to take us seriously. So we converted into a profit making enterprise and I joined the Manchester Chamber of Commerce and the Institute of Directors. Now I feel like we’re respected throughout the country. Local Authorities consult us when they’re setting up cycle training. We’re seen as a kind of oracle.”

Recognition hasn’t come easily. Liz says many don’t immediately understand the importance of cycle training and it’s a male dominated world. But recently BikeRight won Best Growth Business of the Year and Overall Business of the Year at the 2009 North West Women in Business Awards. Liz says she didn’t expect it at all; “I was amazed to hear BikeRight described as a business that saves lives! There are more cyclists in Manchester now and I hope I’ve been a part of that.” Young cyclists and their families around the city can certainly be grateful.