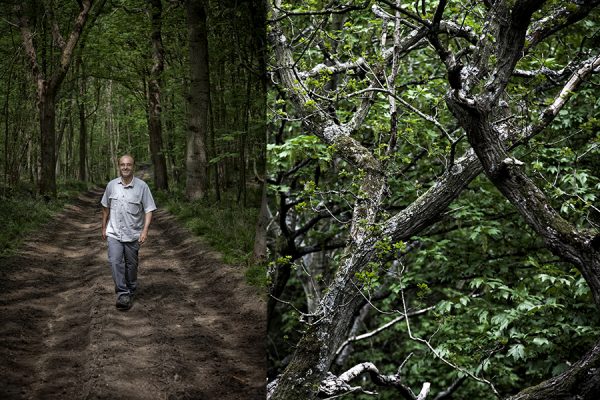 Understand the Forests 6th of October 2016

“I am one of those privileged people who work on something they are passionate about. I wouldn’t want to do anything else.” Yadvinder Malhi is reflecting on his choice of career, on a sunny day wandering around Wytham Woods, an ancient woodland used by Oxford University for environmental research.

We are checking-in on some of Yadvinder’s graduate researchers around the woods, while we talk about how to make a difference with ecosystem science. Yadvinder is a professor at Oxford and has a string of academic roles around the University and the world. His work aims to increase understanding of the interactions between forest ecosystems and the global atmosphere.

“When I was little, I was always fascinated by the bugs and snakes my cousins would bring home,” Yadvinder tells me. These were the early signs of future interests, when he was a child living with his grandparents in India. Later, after a physics degree at Cambridge, he thought he would become an astronomer. However, he quickly realised he’d rather be outside than stuck in front of a computer screen. That’s what attracted him to his current discipline, the earth sciences.

Nowadays, Yadvinder has a young family and only manages to get out to his tropical forest research bases once every couple of months. However, when he first started out in the 1990s, he would spend all day on treetop research towers in the Amazonian rainforest. It was a dream job.

His first post-doctoral study aimed to measure the carbon dioxide flows above the tree canopy in Brazil. However, a four month wait for some equipment to arrive gave Yadvinder the time to “poke around” the forest. He explains: “I was struck by how huge it was. So much uncharted green, and amazing biological function.” Yadvinder became hooked on documenting unexplored forests, as well as how energy and nutrients flow through the forest and interact with the air. “A lot of the work, I have done, has been pure discovery. That’s why I find the forests in the tropics so fascinating, because there is still so much to learn. In many of our sites in Peru, we find a new species of tree every day.”

The majority of research funding that Yadvinder gets, is to understand the impacts of climate change on the forests. By comparing forests in Peru and the Amazon, he and colleagues have discovered that the forests are increasing in biomass over time. This, they have concluded, is as a result of the increase in CO2 in atmosphere. Normally, you would expect forests to be in balance: “It’s a moderately good thing. If the rain forests weren’t doing this, climate change would be 10 or 20% faster. But the ecology is also changing.”

As well as the impact of climate change on forests, Yadvinder is interested in all kinds of contemporary change, for example, deforestation, over-hunting and logging. He wants people to appreciate that there is a middle way where communities can live and use the environment around them: “It’s often characterised that it’s either all or nothing. When I tell people that I am working in the Amazon, they ask me “Is there any of it left?” Well, we are talking about a forest the size of a continent. It’s still there!“

Over the years of working in Brazil, Yadvinder has seen a big positive change. In the mid1990s there was massive environmental destruction in the Amazon, but now there has been a complete turn around: “Brazil has reduced its deforestation rates by 10 percent. It has contributed more to taking CO2 out of the atmosphere than the entire Kyoto Protocol.”

This is the result of a cohort of Brazilian scientists, that rose through to positions of influence in 2000s; in the government, key NGOs or media. Suddenly, there were respected Brazilian voices arguing for the need to protect the Amazon, rather than just outsiders. Within a few years there was a huge change, with the Brazilian government engaging with the issue and improving top down governance. In addition, international pressure on multinational companies who were responsible for much of the deforestation, started to have a significant impact on how they operated.

This growth in local capacity and international consumer pressure is a source of great optimism for Yadvinder. There is a thirst for data and knowledge about the forest, and the way his research is done in the field has changed for the better. Rather than exotic explorers, helicoptering in every few months to gather data, there are now many highly skilled local scientists who can be on the ground all the time.

As well as these enhanced networks of cooperation, big technological leaps mean there are major advances in the work that Yadvinder can do. Hyperspectral sensors are allowing them to see the biology of the trees from the air, and in the future from space. Yadvinder likens the progress to the use of MRI scanners ten years ago: “We are seeing patterns in the biology of the forests, but we don’t understand what they mean yet. The technology is driving a whole new vision of landscapes.”

When he cannot get to the Amazon, Yadvinder loves to come to Wytham to oversee the research projects there. “It’s my therapy!” Yadvinder says. How brilliant to be able to describe your work in that way. Any advice to those who are wanting to make a difference like him? “Find something you are really passionate about, because that way you will get a lot further”