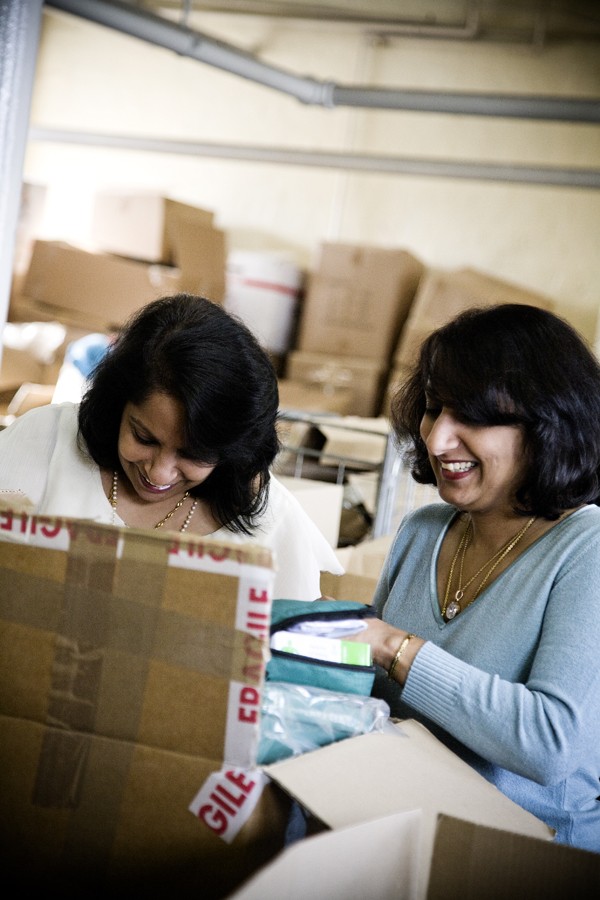 Redirect waste to where it is wanted 15th of March 2010

Redirect waste to where it is wanted

Rama and Sujata Bhalla are the brains and the energy behind Giving World Online, a charity which takes business waste and redistributes it to those in need. Businesses can use GWO’s simple website to ensure that their surplus IT equipment, stationery, furniture and other goods are not wasted, but instead put to good use by reputable charities.

I met these entrepreneurial sisters at their warehouse in Leicester. The three storey former printing press looks almost derelict from the outside and I wandered around for some time trying to find an entrance that was in use. In the end I had to resort to my phone and after a couple of minutes Rama Bhalla appeared from behind a peeling green painted door.

On the top floor of this mainly unused building is a room filled with boxes of medical equipment, toys, books, computers, a whole range of unwanted goods. In the corner of the room, a small office is walled off. This is where Rama and Sujata do their business. “Actually most of the goods don’t come to this warehouse anymore,” Rama explains to me. “We arrange for the equipment to go straight from the business to the charity; directly from waste to want.” In 2009, GWO prevented 66 tonnes of waste from going to landfill. They have rescued about £1.5 million worth of goods since they started 8 years ago.

The idea came to the sisters when a friend of theirs bought a warehouse in the outskirts of Leicester that was full of paper and said that he planned to throw it all away. The pair were horrified and said that they would find places where it could be used. Nurseries and schools around Leicester took the paper with pleasure and the seed of an idea was sown. Word spread about what they had done and further offers of goods from businesses came in. The women spent their evenings and weekends finding charities who needed what was otherwise going to be wasted and started to call themselves Konnect9. In 2003, someone offered some medical supplies which could not be given away in the UK. Rama and Sujata linked up with a charity in Mumbai and organised a container to get the materials there. “It was going to take four weeks to ensure that the supplies made it to their intended recipients. So I reached a turning point. No-one was going to give me four weeks off work without knowing if I’d be back.” Rama decided to take the plunge and quit her job with the Local Authority. Luckily, family support made this possible: “I live with my family so I was OK.” Also, when she got back home, Sujata managed to fundraise a part-time salary for her.

They carried on working like this, Rama on a part-time salary and Sujata working in her spare time, until 2007. It is so impressive to hear how people give up their time to work tirelessly on something just because they believe it is the right thing to do. That’s exactly what Rama and Sujata were doing when a donor who they had approached phoned them and said “You’re asking for £500, wouldn’t you like more?”. They replied that they certainly would. So the donor gave enough to pay Sujata full-time for two years and it was her turn to give up the day job. “Having Sujata working full-time made a huge difference. We have the space to think a bit more strategically.”

They realised that the internet could really help them with what they were doing and so worked towards launching Giving World Online. “We went on whatever course we could to learn about the internet, so that we were able to direct our website developer as well as possible.”  The website is still evolving, but right now, businesses can go on there and advertise what they are trying to give away. Then the charities, which are screened by Rana and Sujata, can say that they have a need for particular goods. If the business agrees to give to that charity (they will receive a brief profile about them) then the transaction goes ahead. Usually the charity will then pick up the goods, or pay for the transportation. The aim is to make the process as simple as possible for the businesses.

Rana and Sujata are on the cusp of a big expansion. They are planning to employ 4 more staff members to fuel their growth. They have a charity song written for them by a chart topping, Swedish pop star and Discovery TV have offered to make a TV advertisement for them.  I’m so impressed with their innovation and drive. These women have worked for many years now on reducing waste and reducing deprivation. When I ask them if they enjoy what they do, the smiles that cross their faces speak for themselves. Their role models? “Our family spirit is one of service to the community.  Our mother would do anything to help others.”

The two women themselves are incredibly modest about their achievements but if all families could say that in the last 8 years they had diverted 200 tonnes of waste going to landfill into the hands of those that need it, just imagine what a different world we would live in.